The Ferrari F12berlinetta is the closest thing I’ve ever driven to a time machine.

Not only does the fastest, most powerful car in the Prancing Horse’s current Australian stable have the ability to propel you towards tomorrow at an alarming rate, it has a magical power to transport you into another dimension, one occupied by a league of gentleman beyond the realm of mere mortals.

It does the former through its staggering level of performance, and the latter by the simple fact it costs $690,745 – which, while not the most expensive car on-sale in Australia today, is still a huge amount of money in anyone’s books. And that’s before you throw the additional $133,500 worth of optional extras fitted to our test car, and the taxes charged to put it on the road. 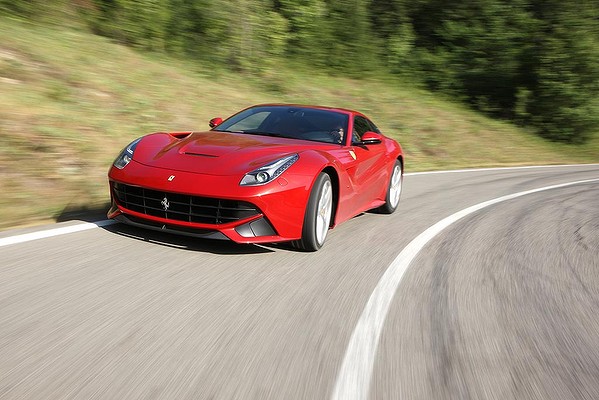 Dismissing the cost as just another element of the F12’s extravagance, it is almost possible to justify saying it is worth every penny of its admission for those elite few that can afford it.

For starters, it looks absolutely stunning in the metal; it’s Pininfarina-designed body offering equal doses of modern race-bred aggression and the classic front-engined proportions that have made its predecessors – from as far back to the iconic 250 GTO right through to the 599 that it replaces – some of the most sought after Ferraris of all time.

More than that though, its curvaceous lines are designed with the single-minded purpose to make it go as fast as it looks. The sculpted bonnet has what Ferrari dubs an "aero bridge" that diverts airflow through the channels in the front guards which forces it down the flanks of the car to generate downforce without the need for big wings. It also has active front brake ducts in the lower section of the gaping front grille that open when the massive carbon stoppers need to be cooled, but otherwise stay closed to reduce drag and improve fuel consumption.

The sense that it’s been designed with form and, rather than over, function continues as you slide into its carbon fibre-cloaked two-seater cockpit. While equally as stunning in terms of quality and presence, the cabin is simply focused on maximising the driving experience.

While the passenger is faced with a clear view of the road ahead (which might be intimidating in itself), the driver is faced with all the controls – most of which are located on the steering wheel itself, including the indicators, windscreen wipers, headlights, adaptive suspension and the Manettino switch which adjusts the vehicle’s electronic wizardry.

It is at first a little overwhelming, particularly getting used to the indicator buttons, but it doesn’t take long to comprehend its benefits and not only does everything become second nature, you suddenly feel like Ferrari’s F1 stars Fernando Alonso or Kimi Raikkonen even driving around town.

Speaking of which, while it is naturally intimidating steering something you don’t own that costs around the same as a three-bedroom suburban house, the F12 is actually quite easy to drive in everyday conditions.

For a supercar of this calibre, there is a decent amount of vision through the rear hatch and the haunches over the front guards protrude just high enough so that you know where each of the front wheels are positioned. You do, however, sit quite low in the snug carbon fibre bucket seats so it takes some familiarising to comprehend just how much longer the nose of the car is, and, considering the F12 is a large car, it is easier to err on the side of caution when parking to prevent nudging the spoiler on carpark bollards and the like.

Otherwise, the steering is precise yet surprisingly light, the suspension is taut yet amazingly compliant, the seven-speed dual-clutch gearbox shifts smoothly when left to its devices and the 6.3-litre V12 has enough low-end torque to labour in top gear at 60km/h. In fact, all of those elements mask its ultimate potential, to the point where you could, if you wished, commute in it everyday.

But that’s not what it does best. It’s at the other end of the driving spectrum where the F12 comes into its own, and lives up to the Ferrari ethos of unbridled passion and performance.

You really do need to own a very fast race track, or at least have regular access to one, to truly experience the F12, because it is almost too quick to extract its dynamic brilliance on Australia’s public roads.

As you unleash the full brunt of the V12’s 545kW, which doesn’t arrive until a dizzying 8250rpm, the F12 becomes a staggeringly fast piece of machinery. Even with the Manettino switched in the Sport setting (just one up from Wet), where the F1-Trac and CST systems are still near their most active, the F12 delivers a brutal punch in the back when you stand on the throttle and rapidly accelerates into jailbait territory, the V12 wailing as it approaches the 8700rpm redline and the steering wheel lighting up like a disco with a series of shift lights indicating it’s time for another gear.

Flick it to Race and it becomes even more aggressive, as the CST is relaxed a little, the E-Diff clamps-up tighter under acceleration and the throttle map is even sharper. Only the brave, or those with the skill of Raikkonen and Alonso, would dare take it a step further and completely de-activate the CST.

They need not anyway, as the F12’s chassis is so delicately balanced that it is an equal match for the V12’s gargantuan power outputs. The steering is so pin-sharp that you find yourself having to unwind some of the steering lock before the apex; and it never feels unsettled when you do – the front-end simply follows any inputs as though it is laser-guided.

The massive Michelin Pilot Sport Cup tyres (measuring 255/35 ZR20 and 315/35 ZR20 on the front and rear respectively) offer huge reserves of lateral grip and work with the magnetic dampers to virtually eliminate any understeer through the corner or any traction issues on the exit.

Thankfully, the carbon brakes are equally as capable of washing off speed as the engine is of generating it, with massive stopping power and reasonably good low-speed feel.

At the end of it all, there is not a front-engined GT car that comes close to the visceral experience and eye-opening performance offered by the Ferrari F12berlinetta.

For most, it is impossible to justify laying down the better part of $1 million for a reasonably selfish, narrow-focused, two-seater sports car, but the F12 soars in a stratosphere occupied by very few rivals.

As far as time machines go, I’d have it over a Tardis anyday. 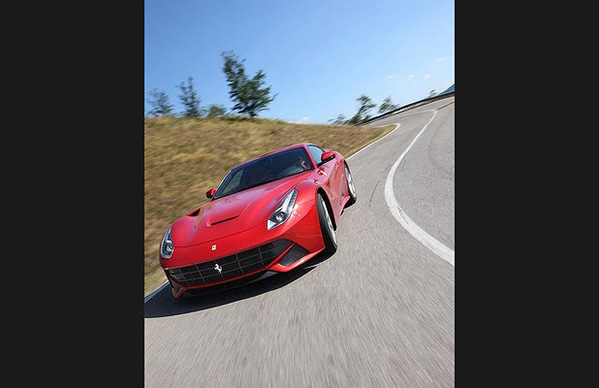 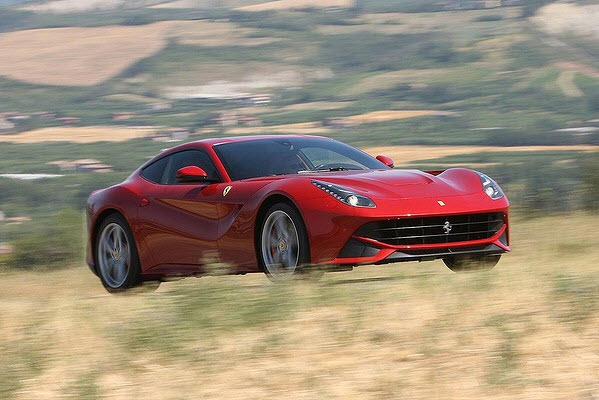 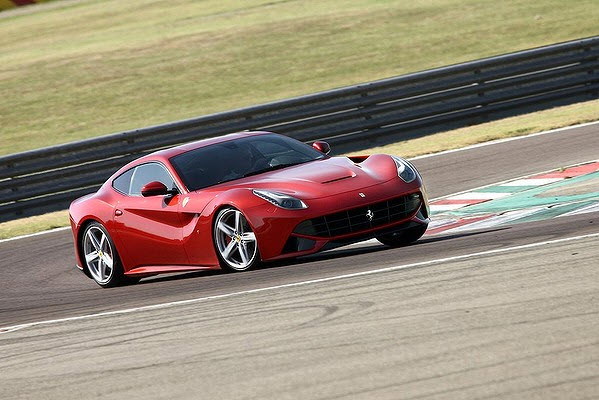 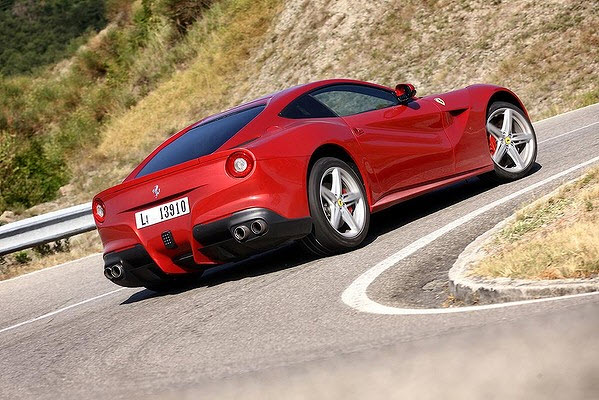 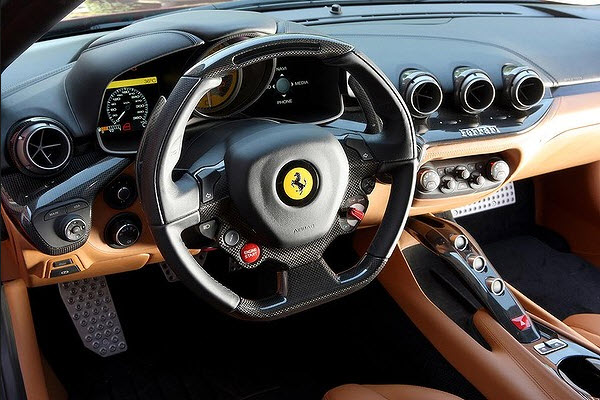 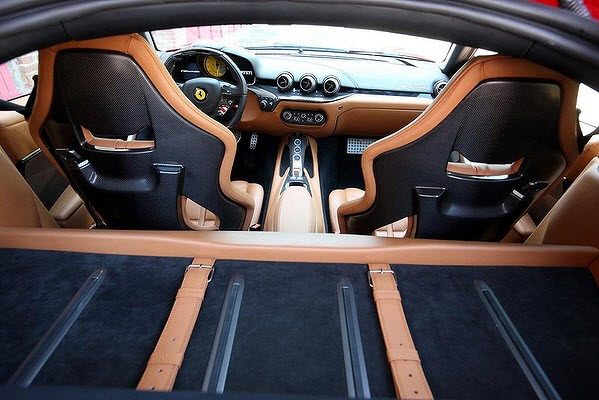 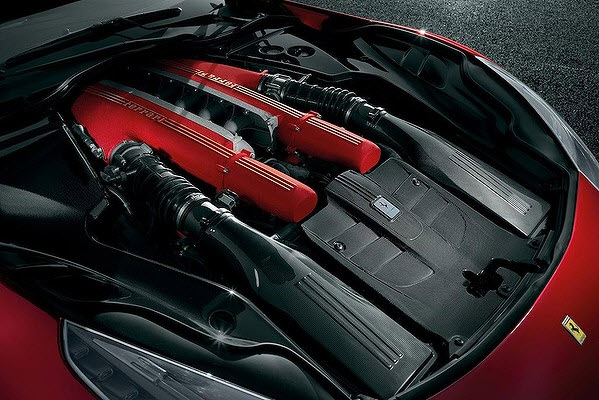 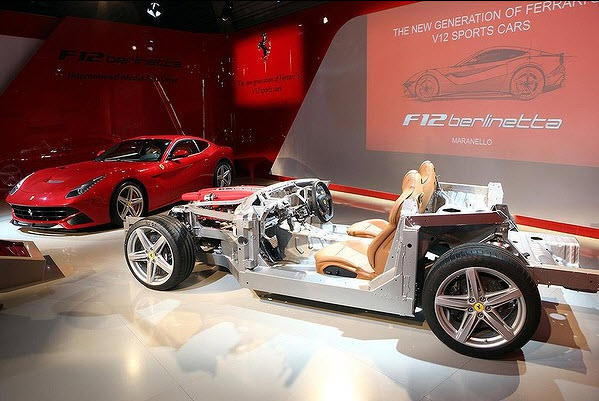