We’ve all collected model cars at some stage in our lives. Some of us still do, often to shelf-breaking extremes. We might have even taken some photographs of our miniature pride and joys, but I bet none have been as beautiful as this – and few of us have gone on to show them off in an art gallery. Swiss artist Fabian Oefner’s regular work has typically involved stunning photographs of natural phenomena, bringing together art and science, making multi-colour macro snapshots of things like magnetic ferroliquids and fire, so when he turned his hand to cars the result was always going to be awesome. 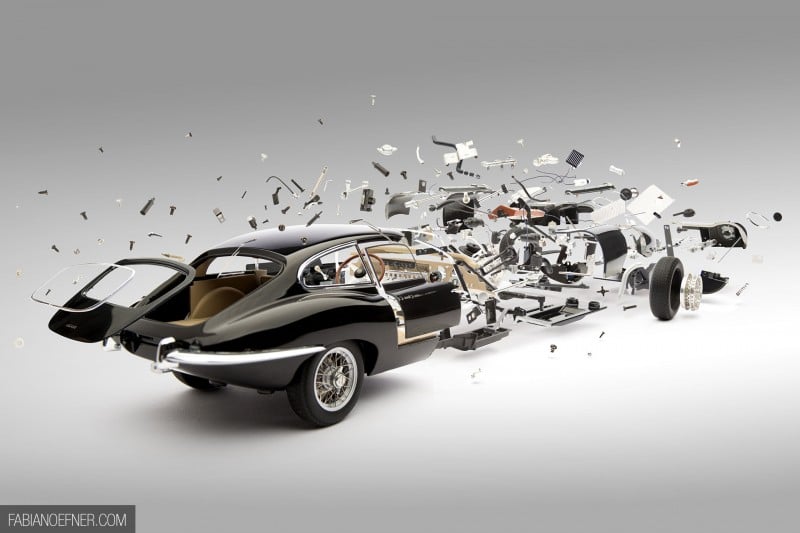 His first set of three images is called Disintegrating. Three iconic cars: a Jaguar E-Type, Ferrari 330 P4 and Mercedes-Benz SLR Uhlenhaut Coupé, are captured seemingly mid-detonation, hundreds of components flying apart in slow motion. It looks like you could just reach out and grab them as they float by. 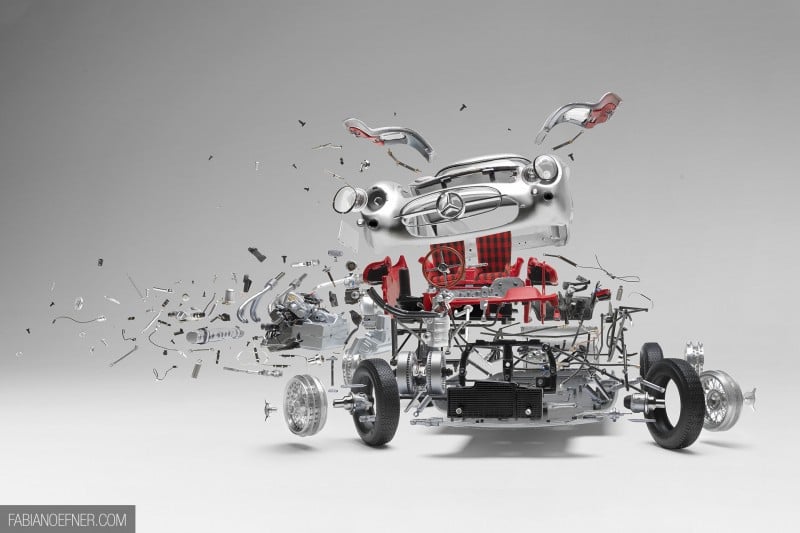 The images turn the traditional concept of photography on its head, creating the slowest high-speed images ever taken. Sublime moments in time that somehow retain the inherent beauty of the original cars. Although, in my mind they could also be going in the other direction: maybe the cars are actually coming together? 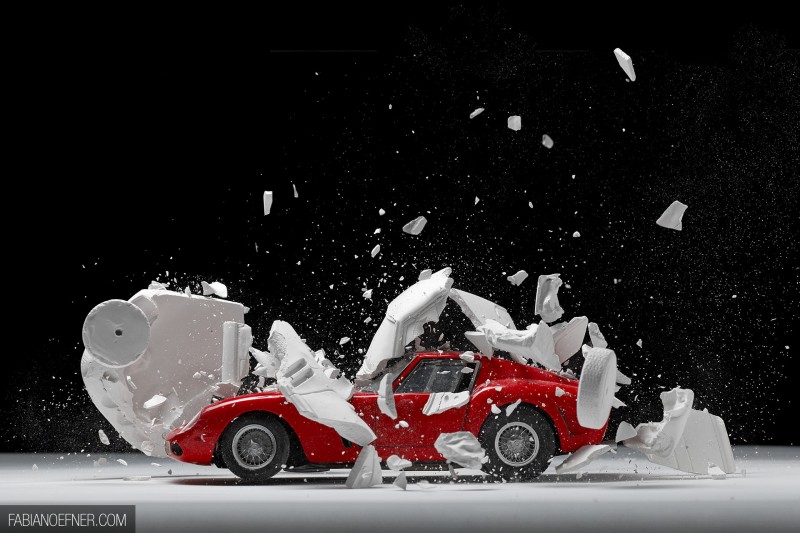 The second trio of images are grouped under the name of Hatch. This concentrates on the violent birth of a Ferrari 250 GTO. 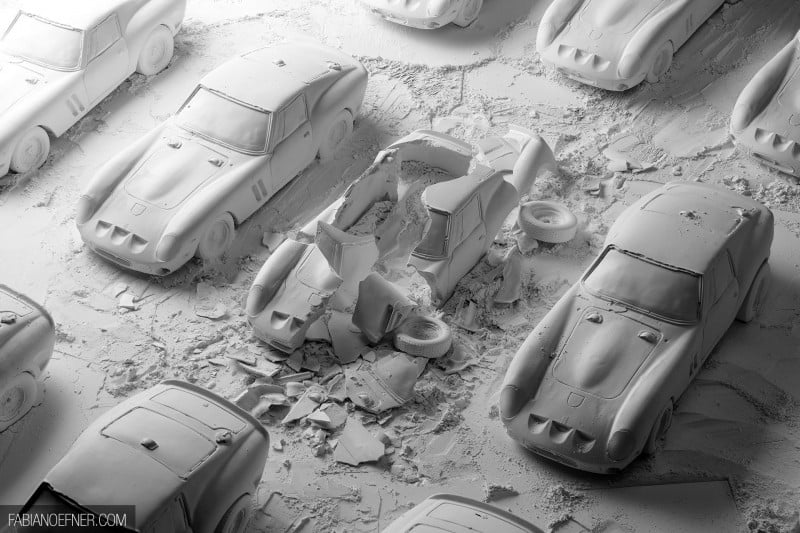 It makes sense really; after all, a car as beautiful as a Ferrari 250 GTO must have been born, rather than built. There are the hatcheries to start, from where the GTO burst forth. I wish I had this many GTOs… 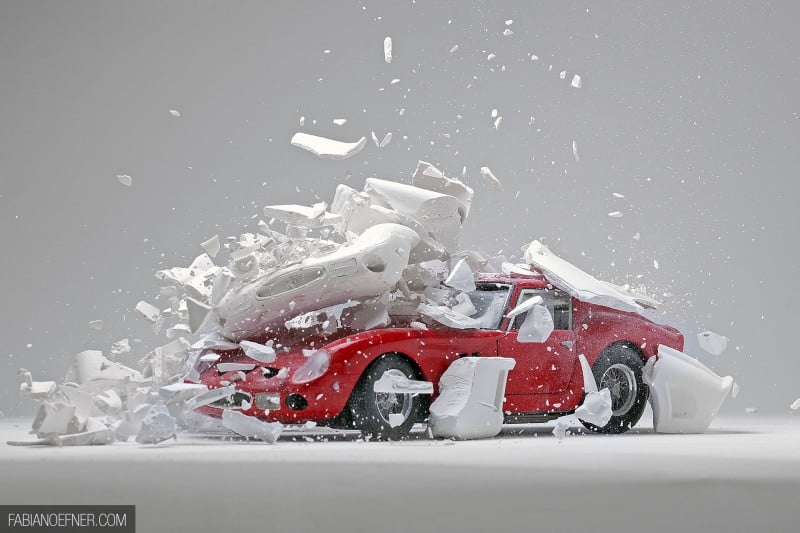 The GTOs then burst out of their shells, the vivid red a stark contrast to the monochrome backgrounds. 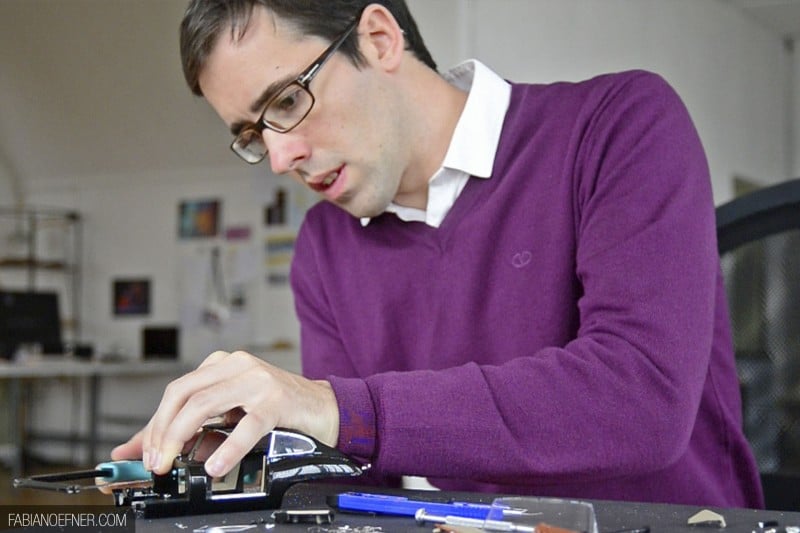 Fabian’s someone who understands that there’s a beauty in process as much as end product: don’t we all like seeing what’s under the skin of a car as much as the outside? Labour of love doesn’t begin to sum up his Disintegrating project: each finished shot took three weeks of painstaking work to complete. 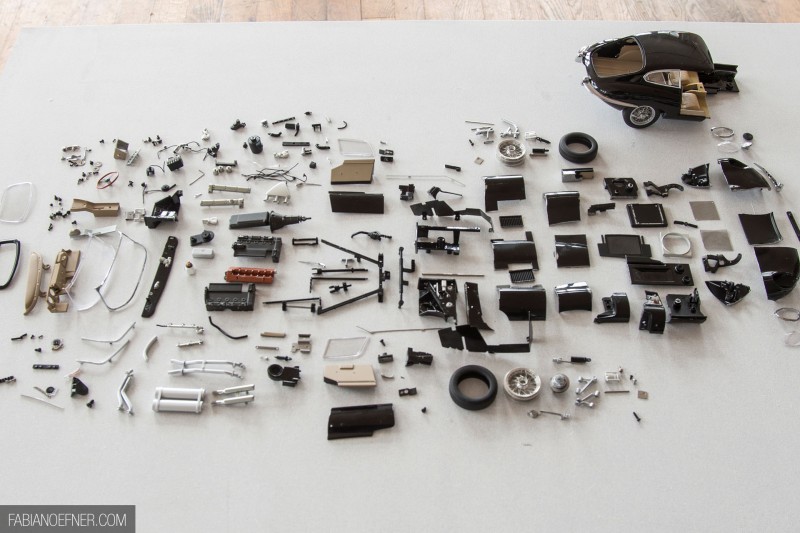 Firstly the models themselves had to be dismantled and the parts arranged. Fabian then sketched out how each component should be arranged before moving onto the real hard work. 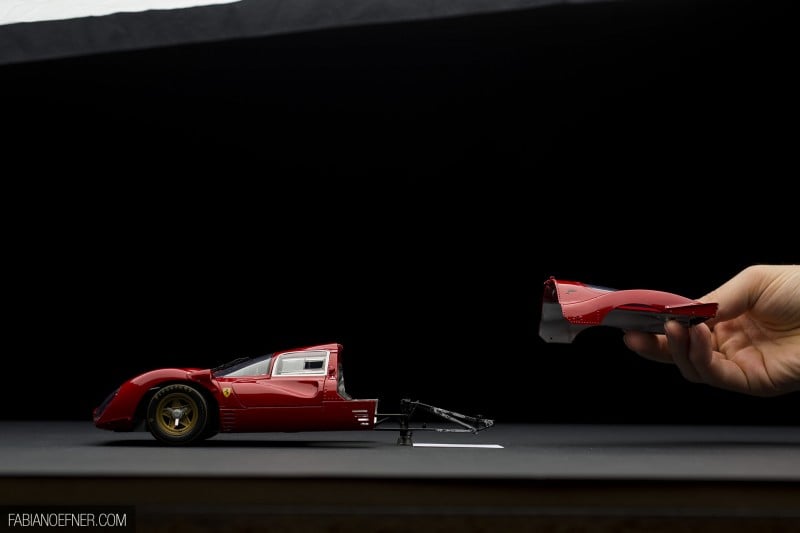 This required meticulously positioning and photographing of each individual component, often using fine thread to hang pieces in position. That’s over a thousand items per car, down to the smallest screw. At this point it probably looked easy, holding two big parts – until you saw the huge pile of tiny bits and pieces still to come… 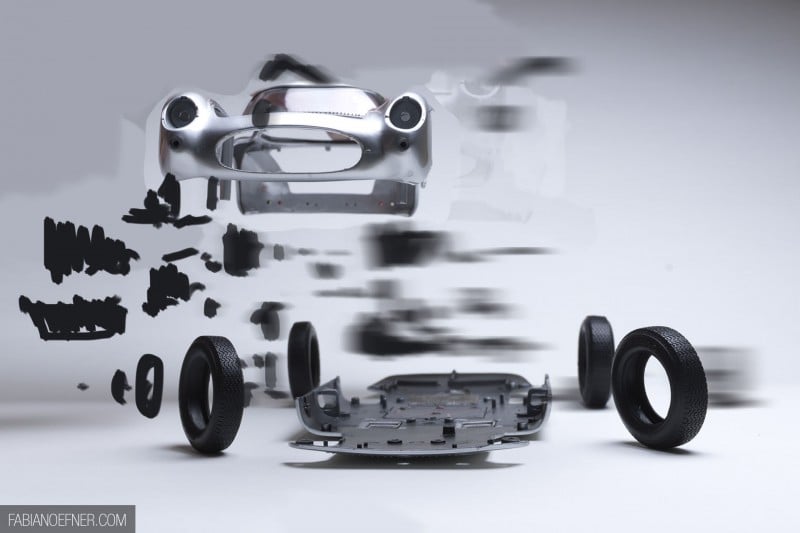 For anyone who’s had to do it, masking layers in Photoshop isn’t exactly the most fun task, so imagine having to overlay, mask and match thousands of images. The result shows that Fabian’s effort was more than worth it though. 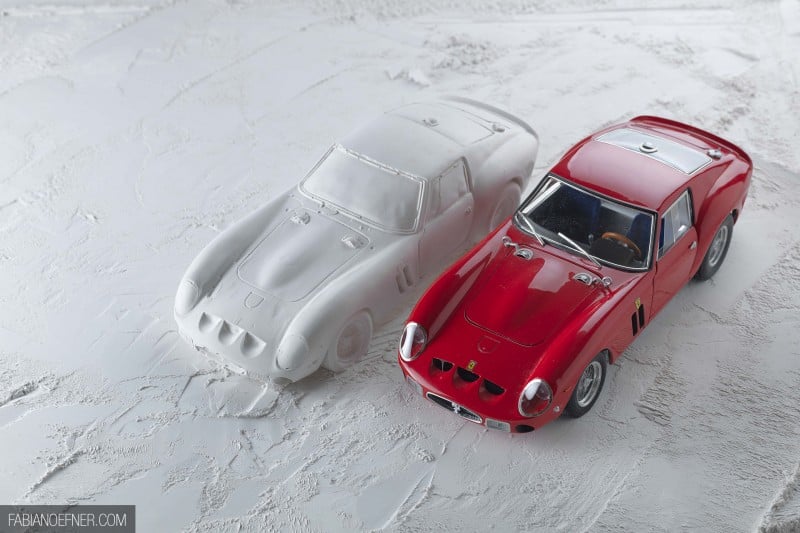 For Hatch, Fabian began by making a latex mould from the model GTO, which was then filled with a thin layer of gypsum to create a shell. 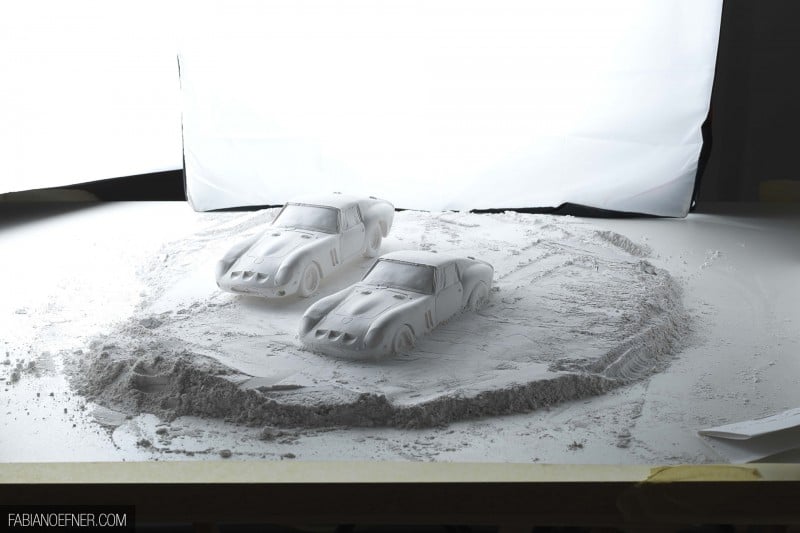 Several dozen shells later, and Fabian was ready for the next stage. Fabian smash! 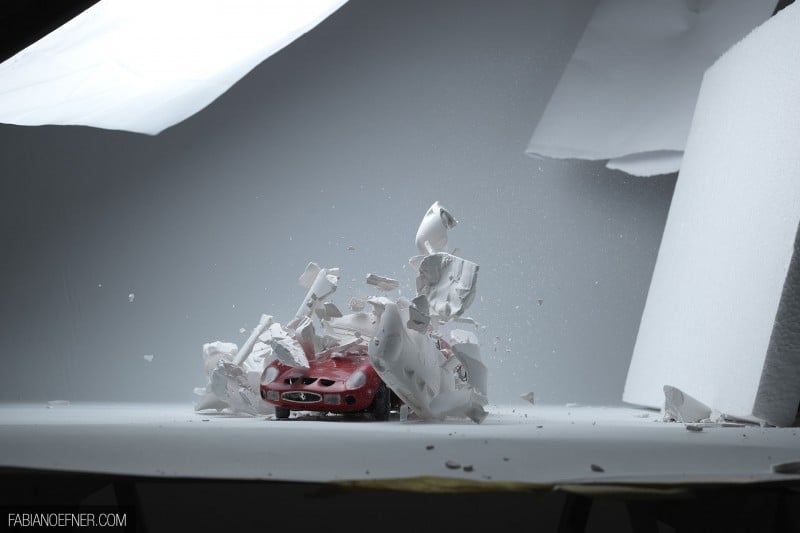 Dropping the shells onto the car, he used a sound trigger to fire the flashes and shutter. Each try was a one-stop shot: if it wasn’t what wanted, Fabian would have to make another shell, clear up the car and start again. Of course, he probably could have done it on a computer, but why make something virtually when you can do it in real life? Like movies with too much CGI, it just wouldn’t have looked ‘right’.

Fabian’s combined our two favourite things: cars and photography. I’d love to hang one of these images on my wall, but my desktop might have to do for the moment: prints of the images don’t come cheap. But you can admire all six images in the flesh if you just happen to be swinging by Switzerland in the near future: they and a lot of other interesting and inspiring works are on show in the MAD Gallery (Mechanical Art Devices) in Geneva, handily placed for the upcoming international motor show. However you experience them though, you’ll be blown away!