Yes, this is a Prius being featured on a car site that's not Consumer Reports.  In pretty much all areas of the automotive culture, the Toyota Prius is frowned upon.  Whether it's the overly-conscious environmentalist owners, or the fact that the car is about as fun to drive as hitting your face with a hammer, or a combination of the two, all we know is that the number of Priuses (how do you even pluralize Prius anyways?) being featured for being custom is pretty slim.  Well, that's about to change...

This story takes us back to one of our favorite places in the world, Japan.  Yes, we like Japan a lot, so I'll spare you the details and ramblings about how much we love that country and its people.  Leave it to Japan to start taking these mundane, gas-saving, electric-hybrid commuters, and start making them actually cool to drive.  Even a few, brave souls here in the US have been taking the Prius and adding their personal touch to them, and...dare I say it...I actually like what I'm seeing. 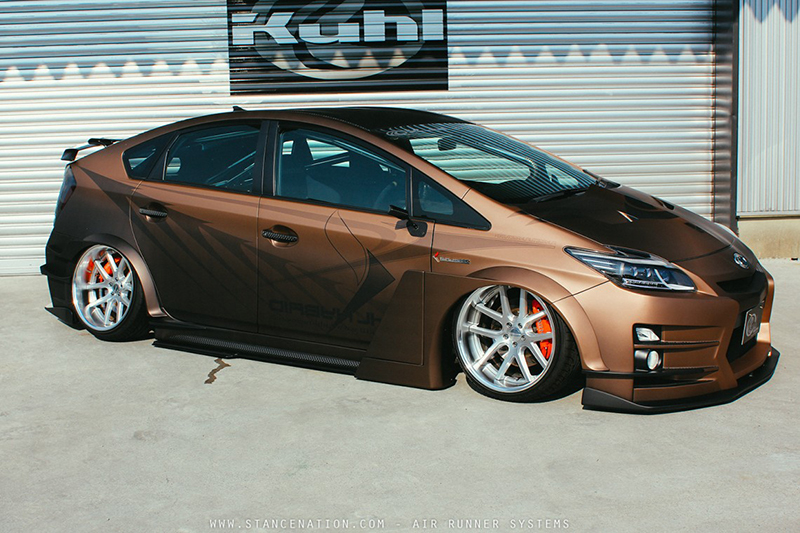 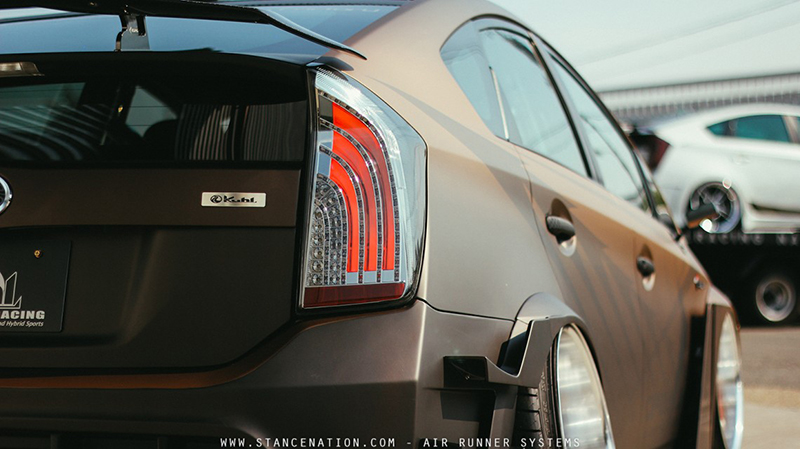 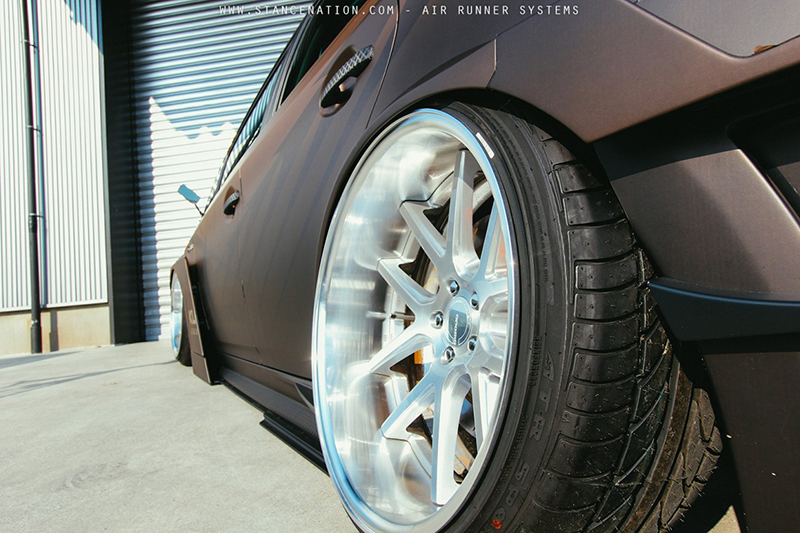 Japan being Japan though, they had to go over-the-top of course.  No simple slam on air, some nice wheels, and a clean body kit would suffice.  Our friends at KUHL Nagoya really wanted to change the image of the Prius, and give it a serious dosage of bad-attitude.  When going through the KUHL Prius, it's more of a game of spot what hasn't been changed.  These guys have gone through everything, and it seems to get more and more extreme the more you uncover.  If the super-aggressive, GT-inspired exterior isn't enough, the air install in the car will literally floor you.  So let's get on with the goods shall we? 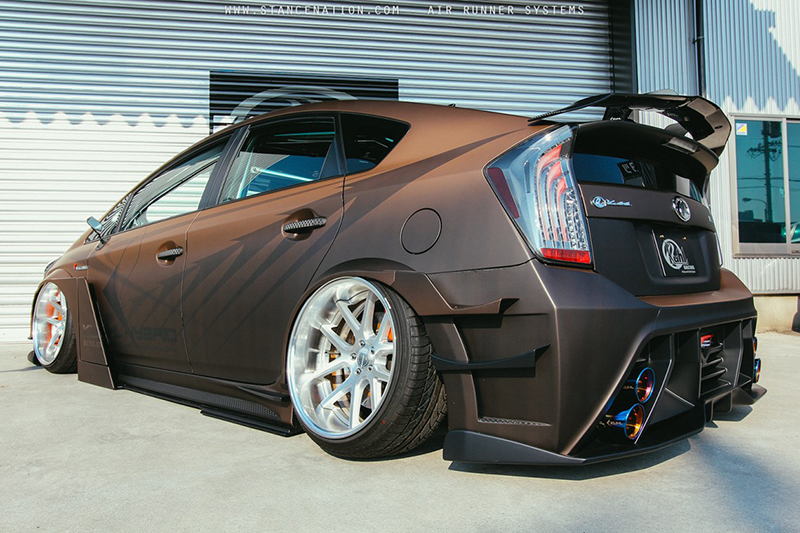 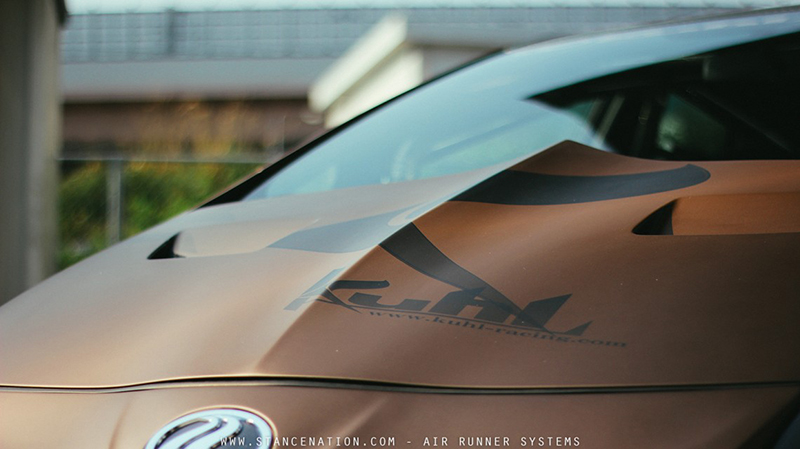 The KUHL crew definitely followed a GT-style build with the exterior of the car which is a stark contrast to a stock Prius.  The KUHL Prius features pretty much the whole catalog of Prius bits including the KUHLHYBRID 30R-GT Wide-body kit which includes the front bumper, side-skirts, rear bumper, rear diffuser, front diffuser, front fenders, door extensions, and rear fenders.  The car also features a KUHLHYBRID aero hood, swan-neck, carbon fiber GT-wing, and a one-off, titanium muffler system.  Some serious, custom lighting is also featured on this Prius.  Audi 3 headlights have been retro-fitted into the stock Prius housings along with acrylic LED plates.  One-off KUHL LED tail lights adorn the rear along with a Valenti LED rear fog-light in the center of the rear bumper.  The exterior was then wrapped in Mustardrun Matte Gold vinyl with KUHL graphics overlaid on the wrap.  The result is one of the most aggressive Priuses I've ever seen, and has me seeing the cars in a whole different way. 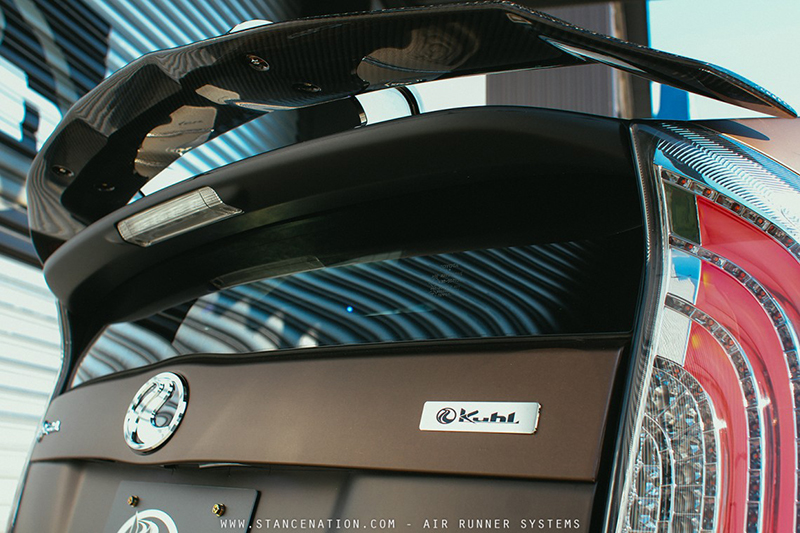 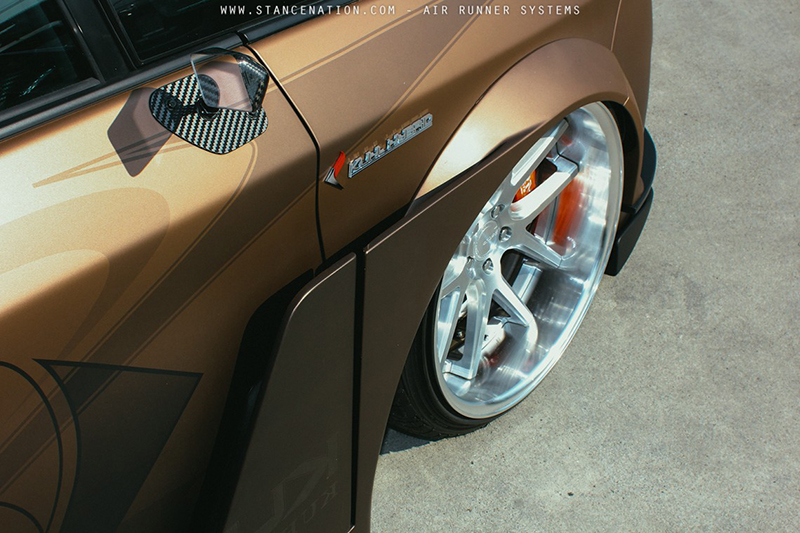 With such an aggressive body, the stance had to be on point as well.  This is where KUHL turned to our mutual friends at Air Runner Systems.  The car features their Version S air-suspension system, but that's about all the similarities it has with an off-the-shelf kit from Air Runner.  The team at KUHL once again got a little crazy with the install.  With air suspension being so popular nowadays, people are no longer just doing standard installs.  The installs themselves turn into their own little builds with custom tanks and intricate hard-line setups taking center stage.  The boys at KUHL really went crazy with this one to show the rest of the world that Japan can play too when it comes to custom air installs. 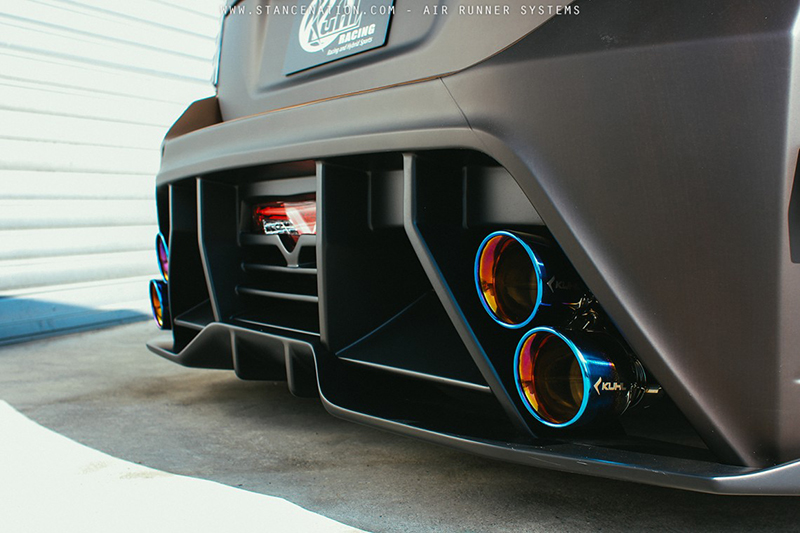 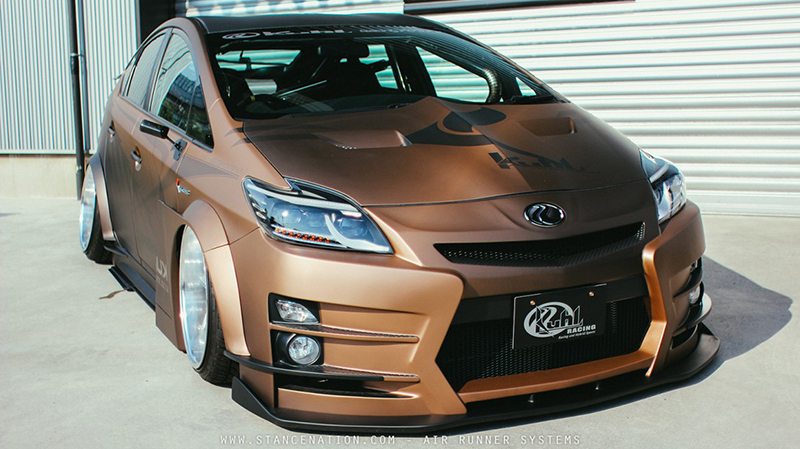 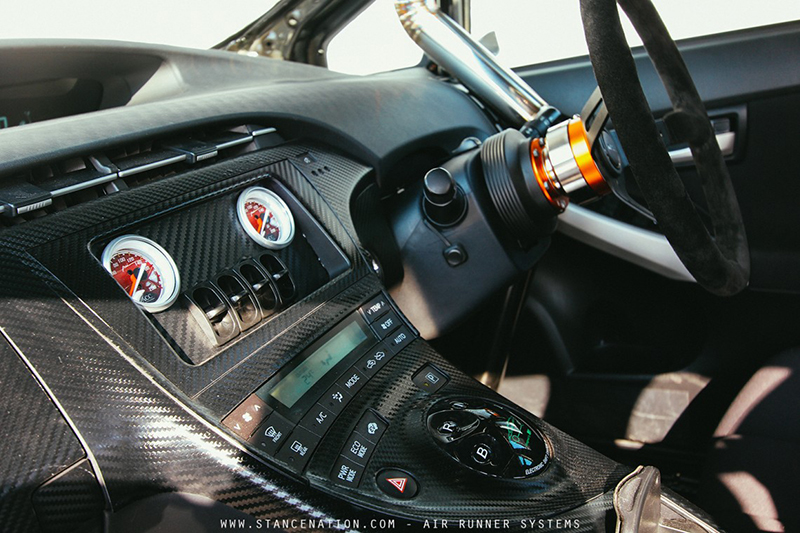 Centered around an Air Runner Version S kit, the KUHL kit features no less than four, four-gallon stainless air tanks, each fed by their own Air Runner Quick Compressor.  The kit is mounted on its own, stainless steel display which dominates the rear of the car along with the custom roll-cage.  For air-management, the Prius has four ACC manual switches, and the incredibly stunning hard-lines for everything done by the KUHL team.  Framed by the polished cage complete with pie-cut bends, air installs don't come much more intricate than this. 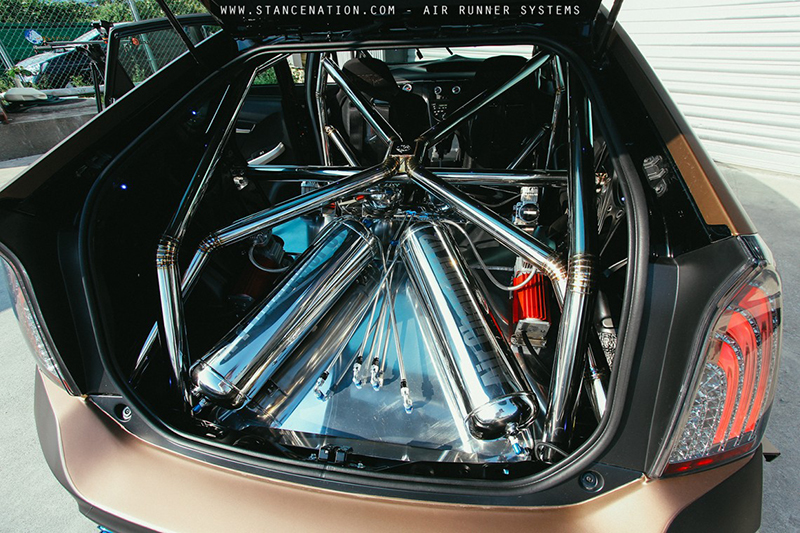 With the suspension dialed and the body on the floor, it was time to address the rolling stock of this Prius.  Work Gnosis CV203s in their brushed finished were employed at all four corners coming in at 19×10.5 all around, but with staggered offsets of 0 in the front and -20 in the rear.  Framed by the massive rollers is an ARMA big-brake kit with 4-pot calipers in front with 345mm discs, and 2-pot calipers in the rear with 335mm discs.  To get the desired camber, the team at KUHL got a little creative.  They narrowed and cut the rear beam-axle 10mm to achieve the -10 degrees of camber out back, and fabricated custom camber plates up front to achieve the -5 degrees which allow the wheels to tuck in at full drop. 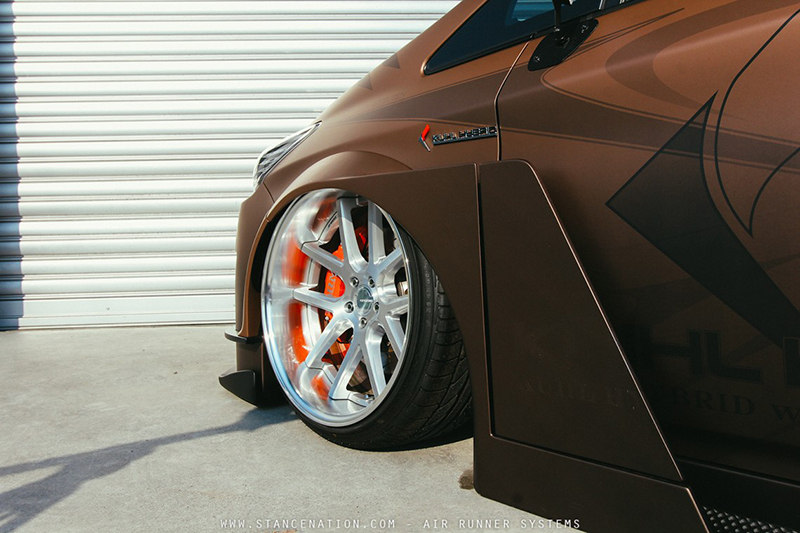 With Priuses like the KUHL Hybrid GT 30 (as it is aptly named) I can see people's opinions of these cars changing.  Companies like KUHL and Liberty Walk take a much more aggressive approach while others like Aimgain give them a more elegant treatment.  Bottom line is that these companies are taking a car that is generally disliked by the automotive community and giving them a new lease on life instead of being a redundant, gas-efficient commuter.  Not gonna lie, if I could have a Prius like this, I'd definitely rock it to work every day.  Wouldn't you? 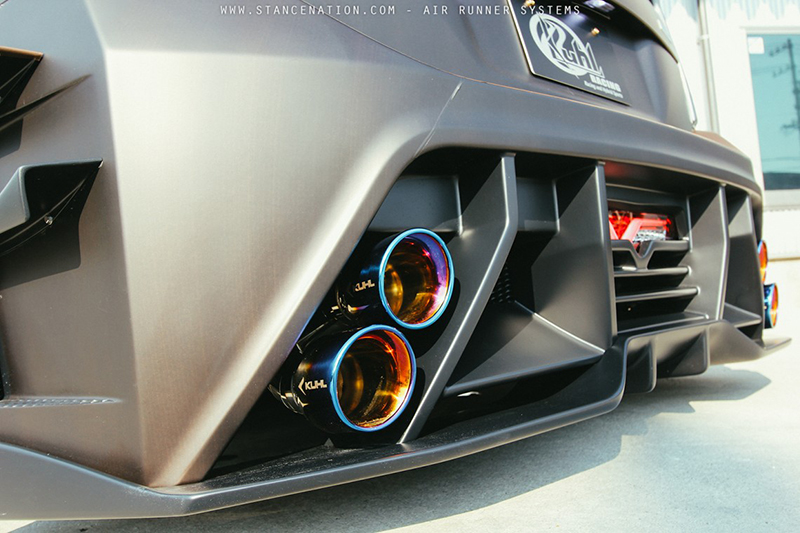