And then there were three. Today sees the public reveal of the new addition to the McLaren Automotive family, the 650S, and Speedhunters were right there at the launch to get exclusive photographic access to the car as it was unveiled to the press ahead of next month’s Geneva Motor Show. That’s right, we were there as the car was unmasked, barely containing the urge to squeal like a school girl as we pointed our cameras its way, so now we can bring you these world exclusive shots, unique to us. Aren’t we good to you? 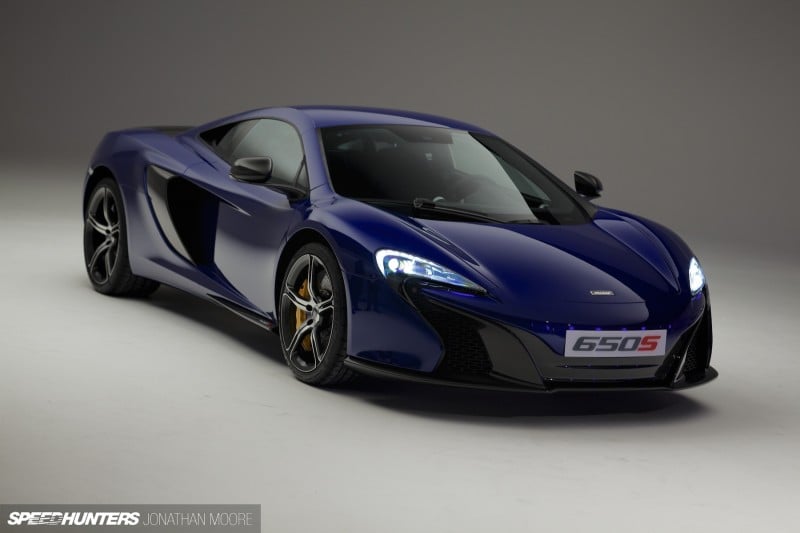 The new 650S sits above the MP4-12C, but takes very clear styling cues from its hypercar big brother, the P1. It’s not the baby McLaren that everyone’s been talking about – the more ‘entry level’ model that mere mortals might theoretically aspire to – but the 650S should still set petrolhead pulses racing. The DNA is clear: the organic elegance of the P1 draped over the bones of a 12C chassis is the obvious thing from a first take, but the 650S is more than just a fusion of those two cars. 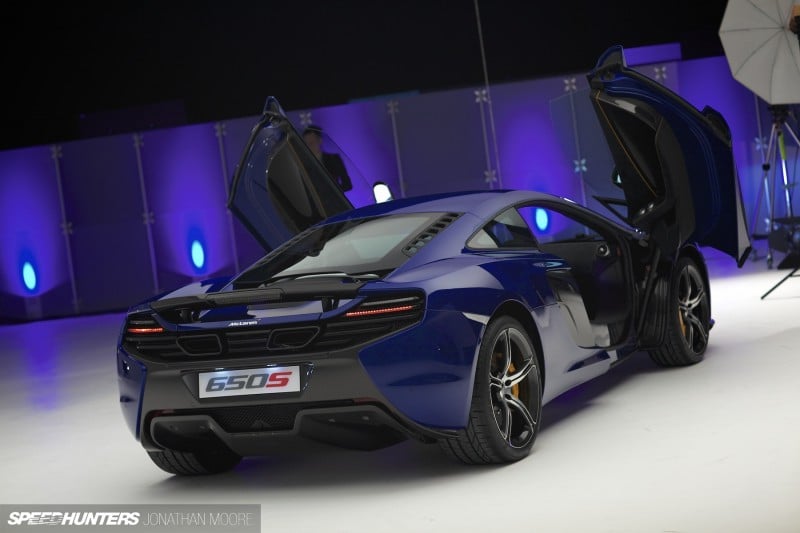 Rather, the 650S is the result of lessons learned from those two cars: a fusion of the fast and the furiously fast that goes right to the core of the 650S. 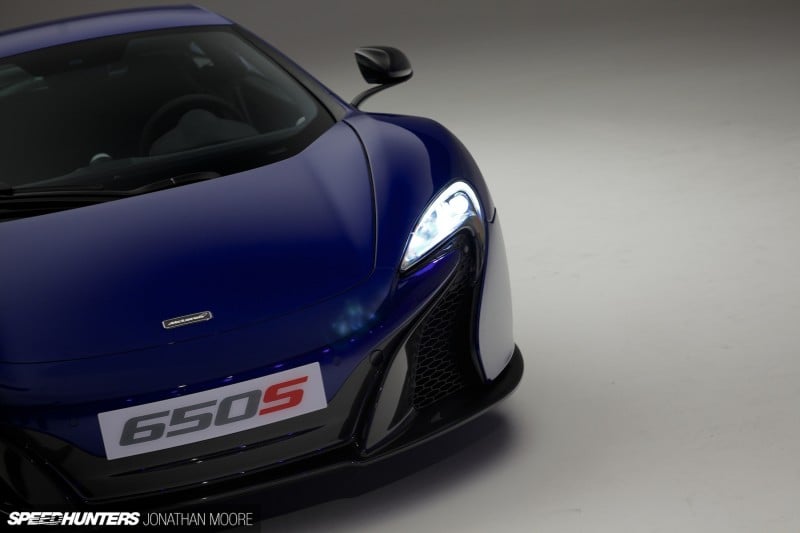 The 650S is about more power – and yet more subtlety as well… The new McLaren supercar is designed to be faster when you want it to be, but calmer when you don’t. 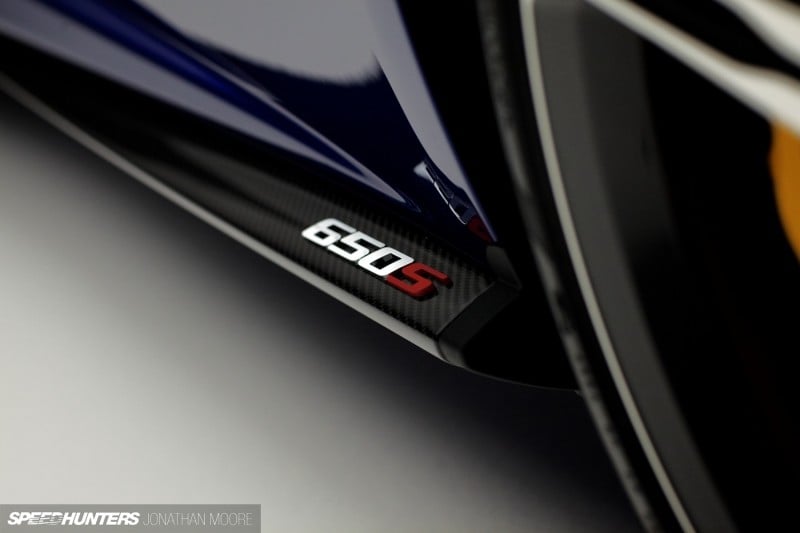 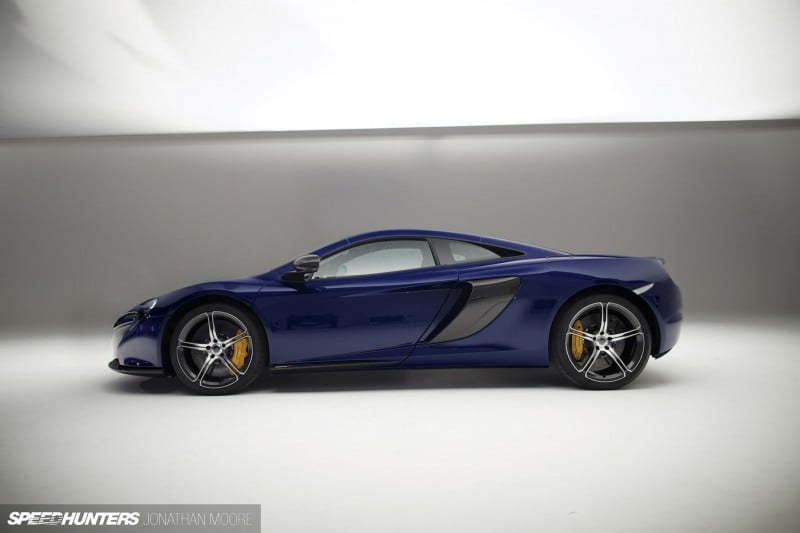 So yes, the name is typically McLaren – but then by my maths, that at least makes it 192 better than the Ferrari 458 Italia. Okay, in model name at least. But in all seriousness, it’s difficult to deny that the 458 is everyone’s target in this market – the car that can apparently do no wrong and is undeniably one of the sexiest cars on the road at the moment. 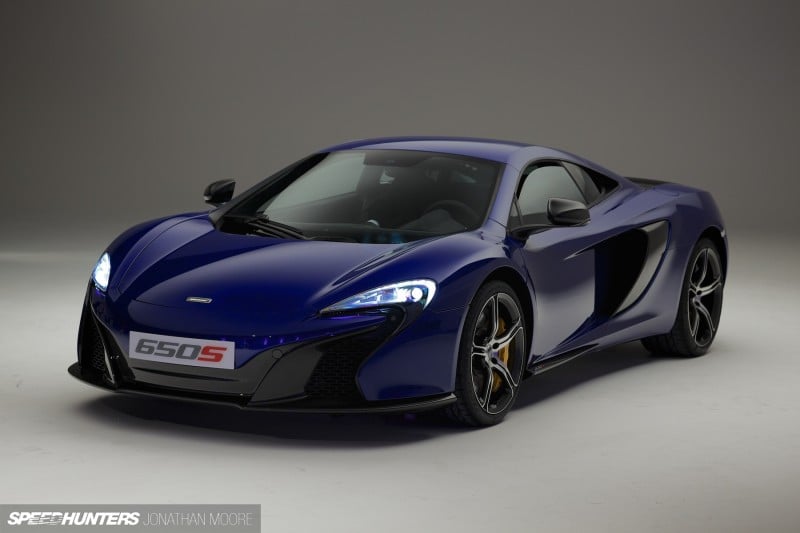 The 650S should give McLaren a pretty good shot at Maranello, as so much of the criticism of the 12C seemed to be around the relatively tame styling rather than the specific ride or performance issues. 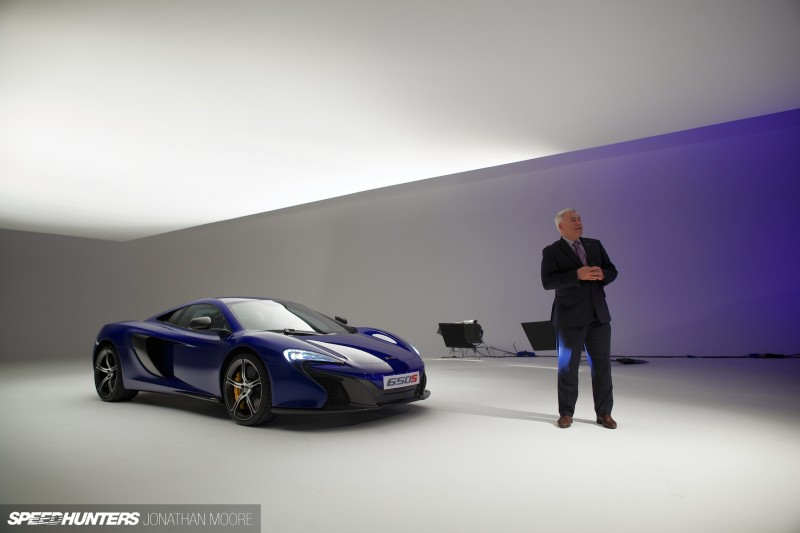 McLaren’s enigmatic head of design, Frank Stephenson, made no secret of wanting to facelift the 12C when we spoke to him last year. But as I’ve already mentioned, the 650S isn’t just an aesthetic exercise. 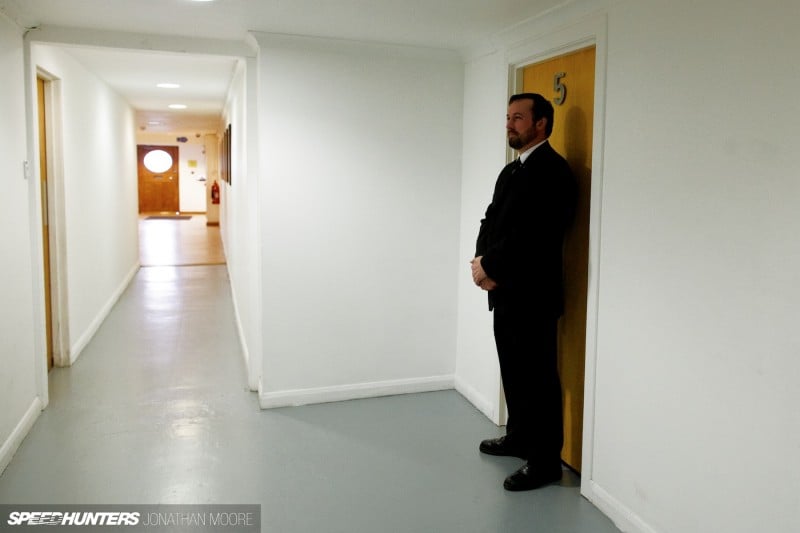 The launch itself was held in a secret photo studio location in London; the select press were held at bay until the appointed hour by a surprisingly friendly security guard. 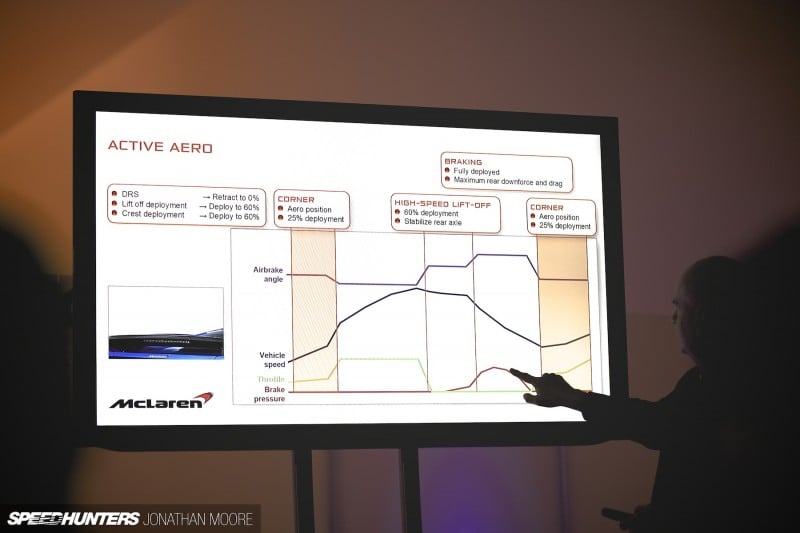 The McLaren Automotive design and engineering team introduced the new car, which entailed a good half hour of more maths and physics than I’ve ingested since my school days. 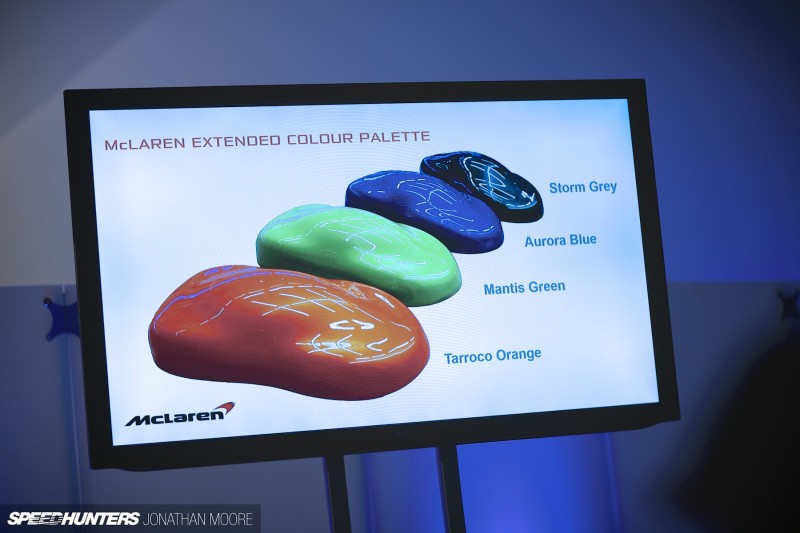 More my level was the introduction of four new colours. 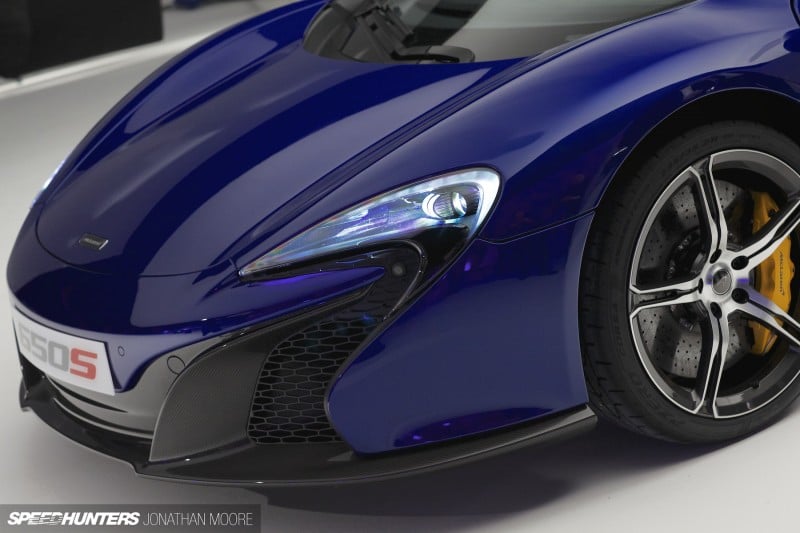 But in a nutshell, there are three distinct modes that you can drive the 650S in: Comfy Slippers, Ferrari-Eater and Genghis Khan. I might not have taken down the official names but these seem appropriate. 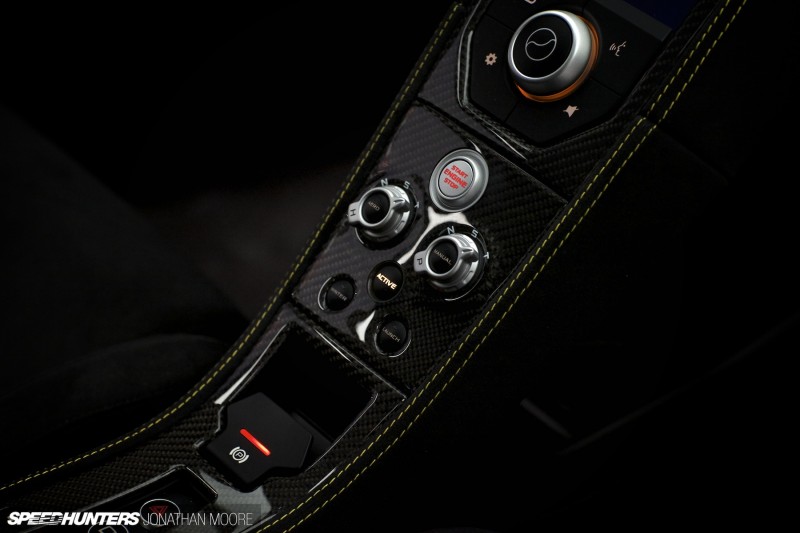 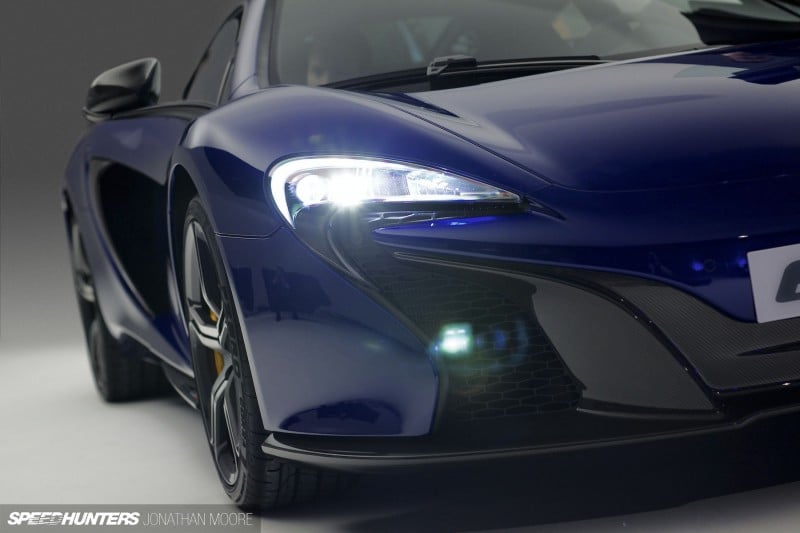 When you’re pressing on and attacking the throttle, another new feature comes in: Inertia Push. This technology harnesses engine torque levels, raising engine speeds at a faster rate for each successive gear. It means you just get a continuous push of strong acceleration and probably start gleefully screaming like a teenage girl. 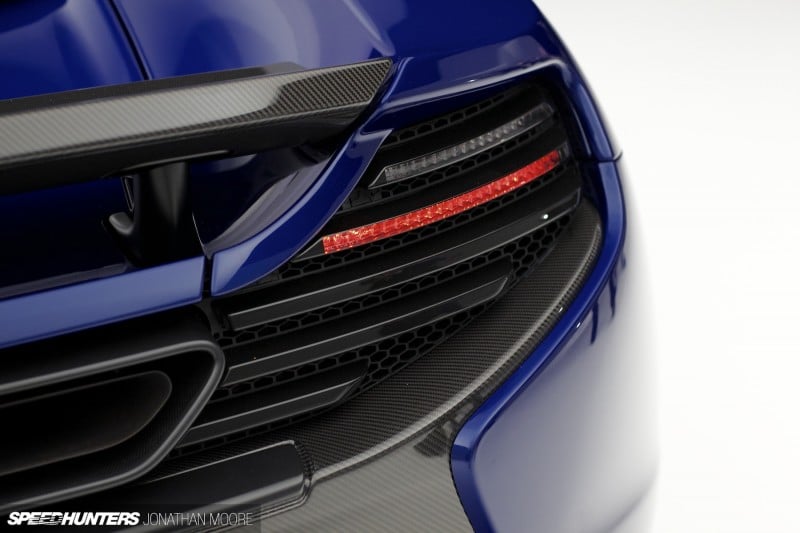 The focus on performance and numbers doesn’t mean that there isn’t a healthy dollop of emotion injected into the 650S, as shown by the predominantly aural-only benefit of a brief cylinder cut when you upshift. It makes the exhaust sound even more throaty and aggressive. That’s a good enough reason for me. Expect 650S owners to head for the nearest underpass or tunnel for testing that out. 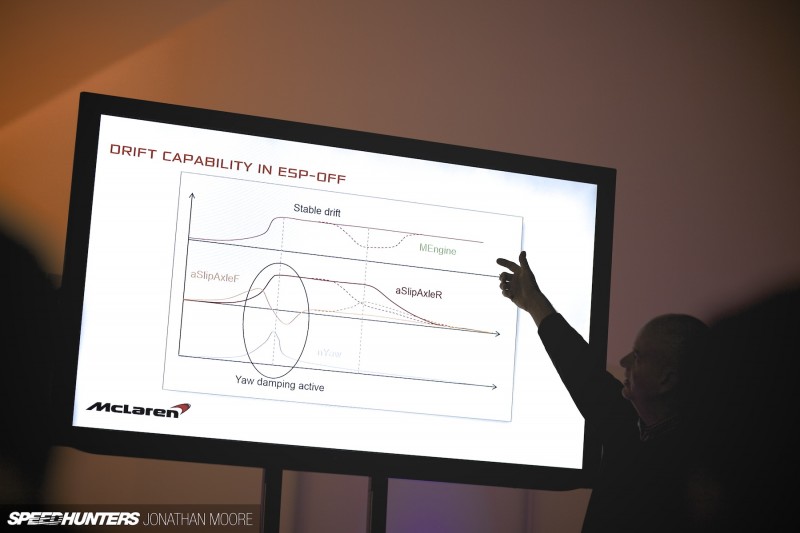 Also, how about this for unexpected: one slide showed, specifically, the drift capability with the ESP mode turned off. McLaren want you to drift this car. Think about that. 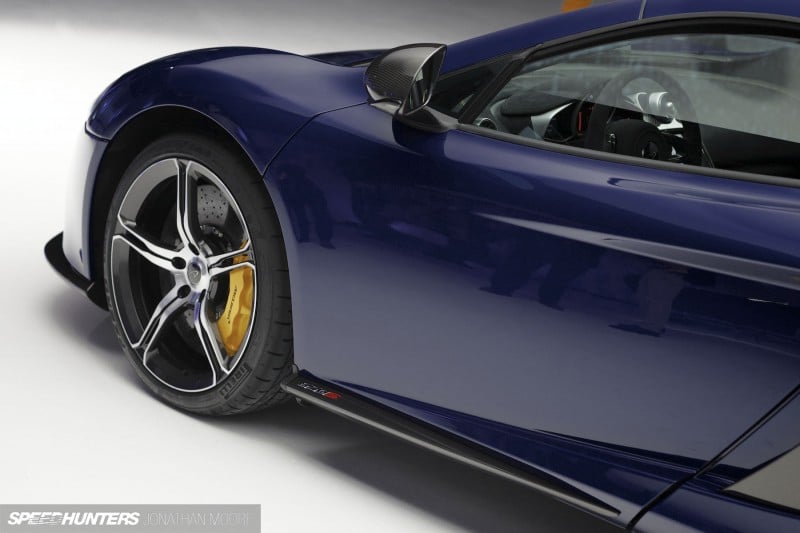 So although I’m sure you need to experience the car to truly understand the impact of the changes and improvements, even the headline figures go a long way to showing what the 650S will be capable of. 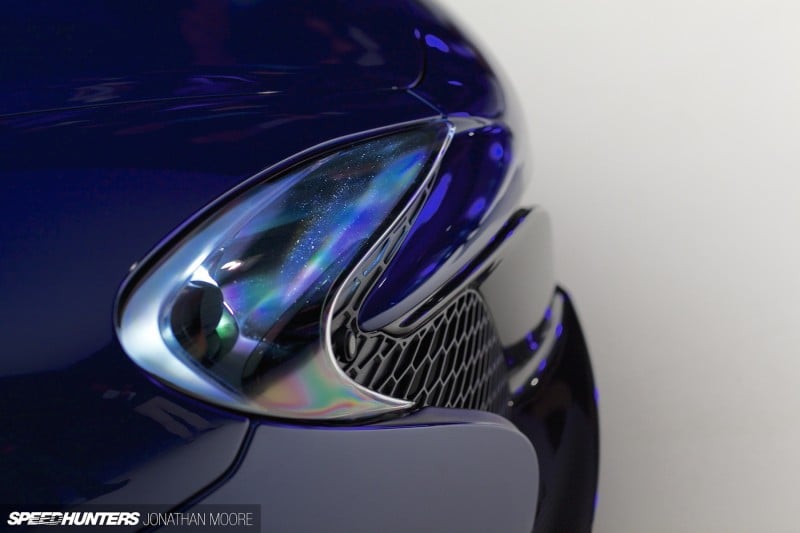 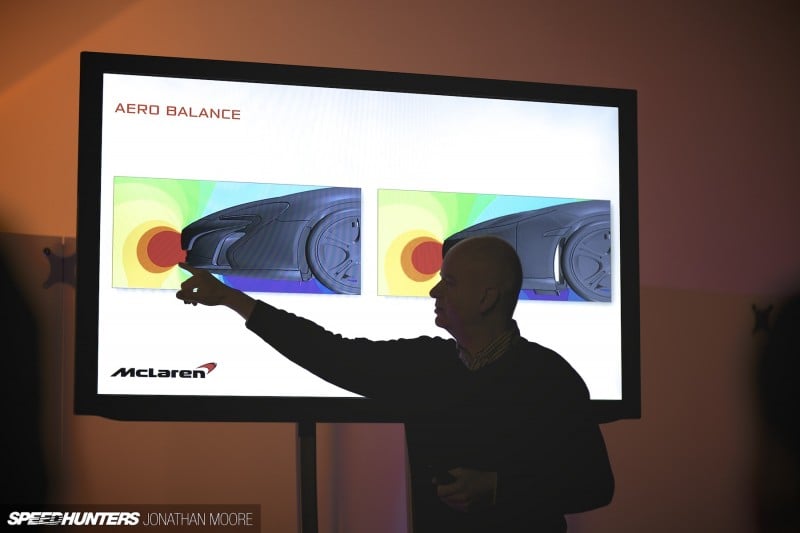 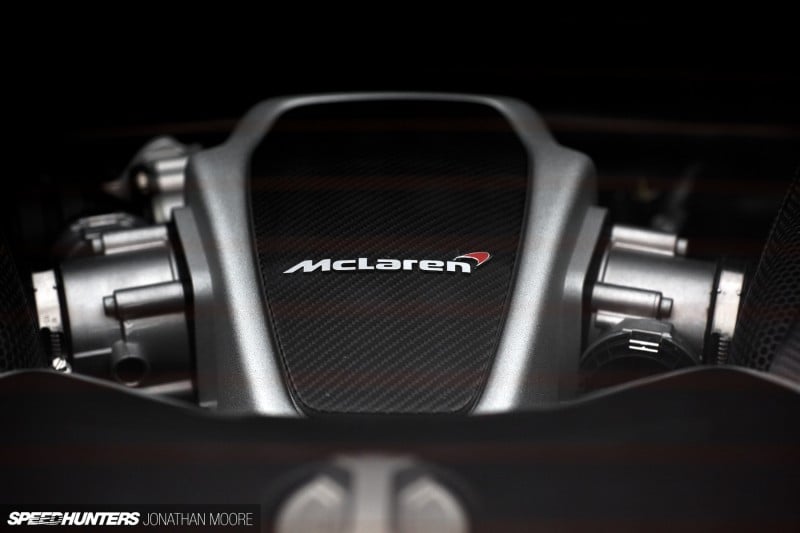 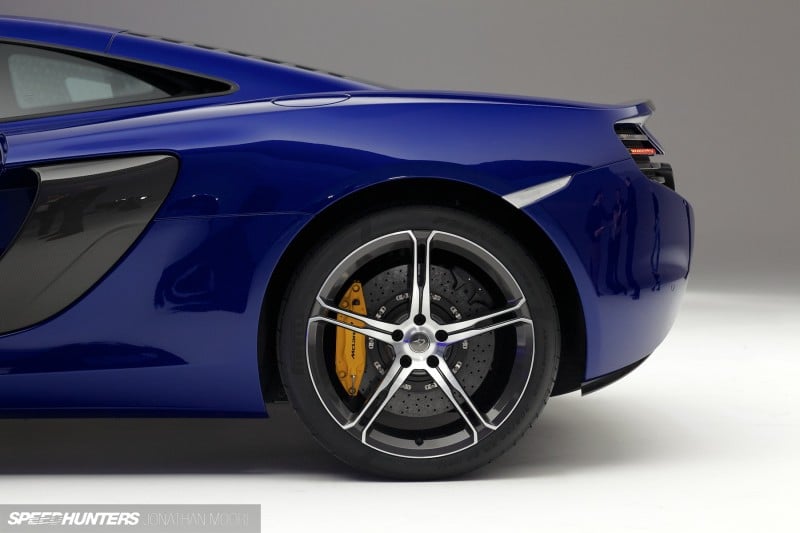 Braking heavily will test your body before it tests the car: in 30 metres you can be at a stop if you press the pedal at 62mph, or 123 metres if you stop from 125mph. Then you possibly have to reorientate your brain from where it’s ended up after sloshing around at the front of your skull. 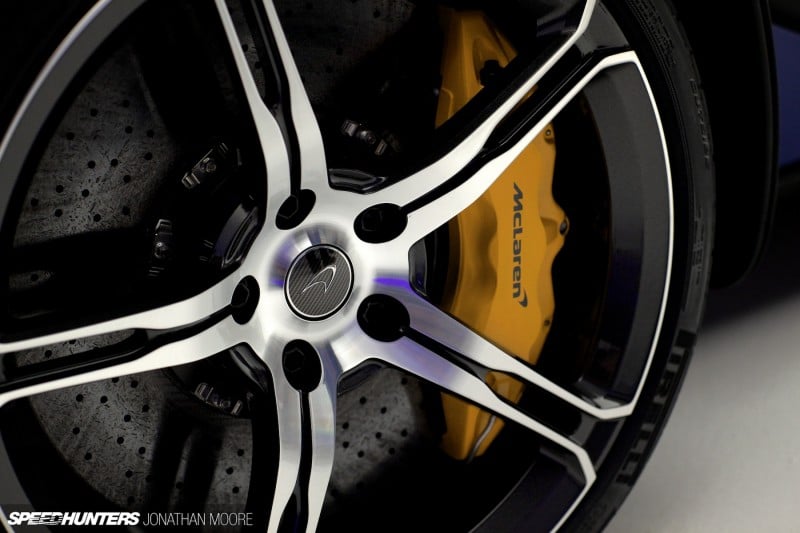 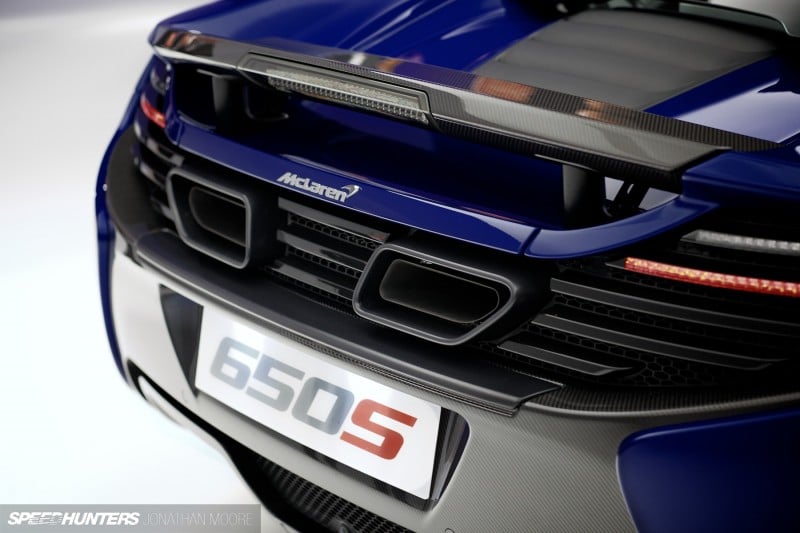 Out back, the McLaren Airbrake (which is actually capitalised in the press release!) is now even more sensitive, operating whenever the car senses extra downforce is necessary, like braking hard or cresting a rise. 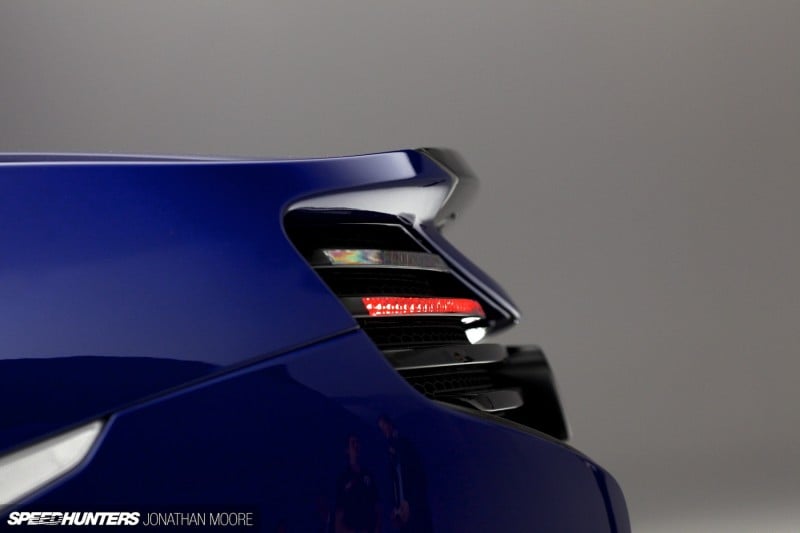 The faster you go though, the more it flattens out – also achievable under full acceleration in Aero Mode. I wish my car had that button… 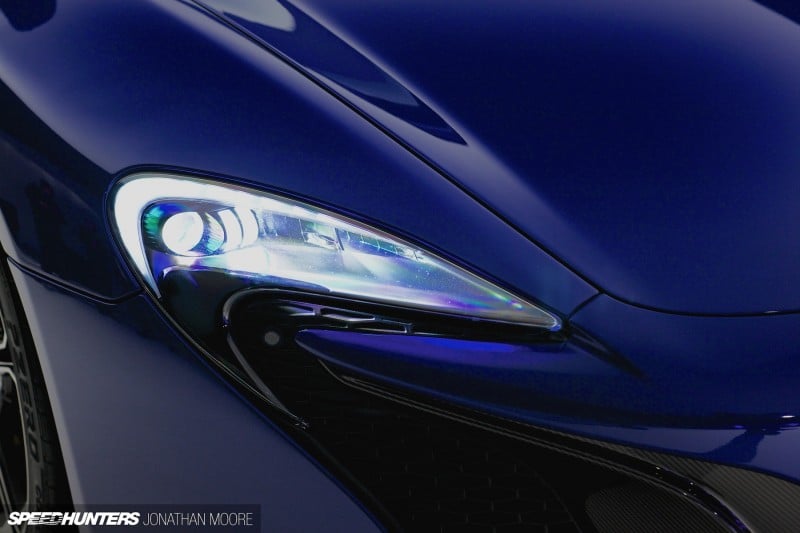 The 650S does share the same carbon fibre MonoCell technology as the 12C, but the fact that the 650S sits as a separate machine is reinforced by the continuing production of the 12C. The 650S will actually be made alongside its older sister, assembled on the same production lines as the 12C at the McLaren Production Centre in Woking. 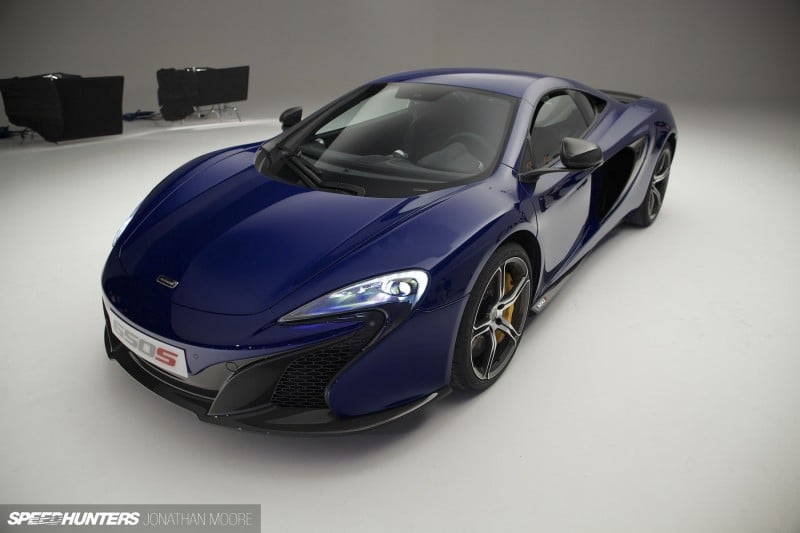 Like the 12C, the 650S will be made as both a Coupé and Spider – and like the 12C, it’s expected that it will be the Spider that sells the most. It’s a healthy dollop of great British pounds more expensive than the 12C, just to help differentiate. As an aside, reading the forums, the surprising thing that seems to have upset existing 12C owners the most about the new 650S is that it has a reversing camera. After all, you still have to park a supercar… 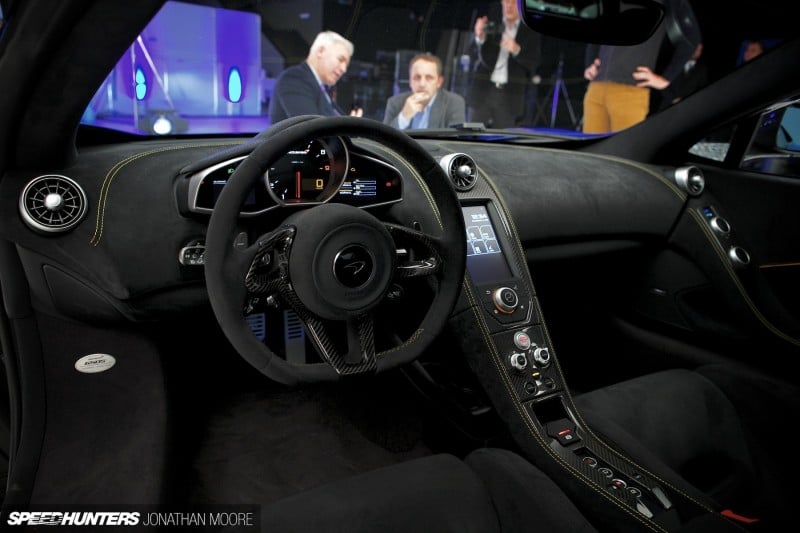 It’s interesting the 650S is very much aimed at road users, compared to a lot of other supercar manufacturers who have been developing stripped down, track-orientated cars – or at least, cars that could go on track if their owners dared take them… 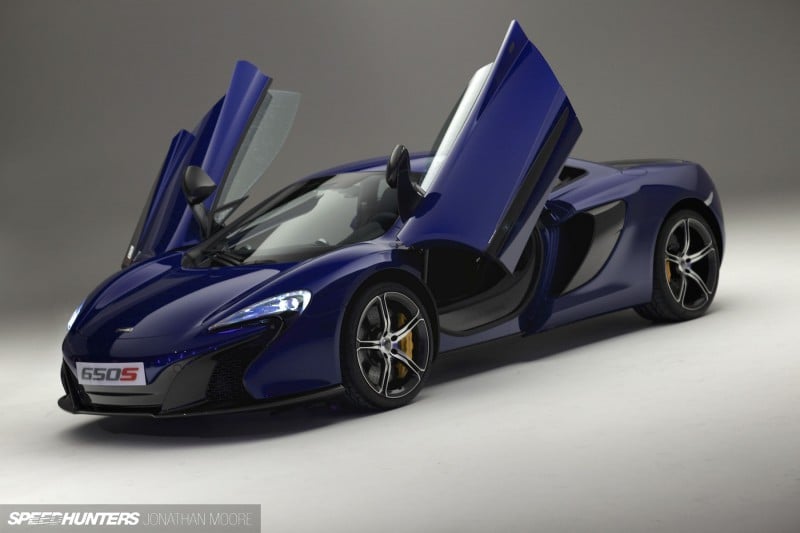 With the 650S, it’s perfectly possible to opt for a full leather interior, stick the car in Comfy Slippers mode and happily – and comfortably – drive around town. And good luck to the owners who do that, I say: at least they’ll be out driving. 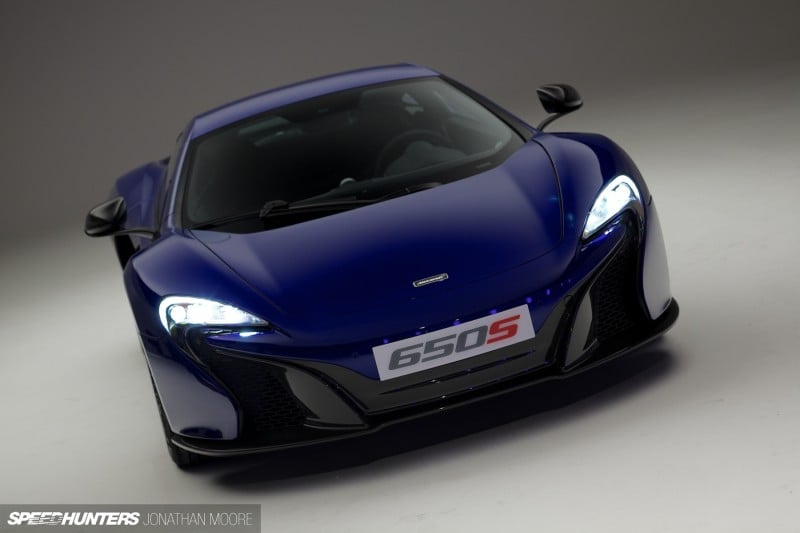 Other people might opt for the full carbon fibre styling package and Alcantara interior, press the Genghis Khan button and head to Spa. Okay, I admit that I and the majority of people reading this would take this option, but still. The 650S is designed to be more than one car to more than one person. Oh to be one of those people…