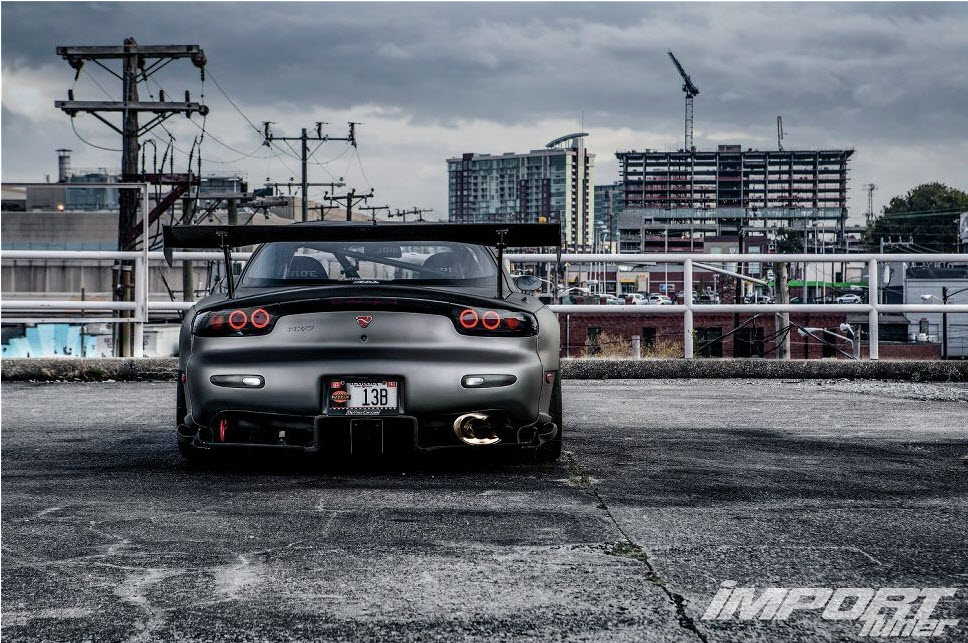 "I really can't remember having any issues with this car." Yeah . . . when was the last time you heard someone with a Mazda RX-7 say that? Or better yet, someone with a rotary motor? It isn't any secret that the rotary engine has its fair share of problems. Conceptually, automotive enthusiasts' relationships with their cars aren't all that dissimilar to their relationships with people. You go into them hoping for the best, but also well aware that issues and problems may arise. The important part is your perspective and mindset, as those determine how you deal. If your devotion doesn't run deep enough, you'll give up and move on. But, conversely, if that love is deep enough, the two of you will stand the test of time. 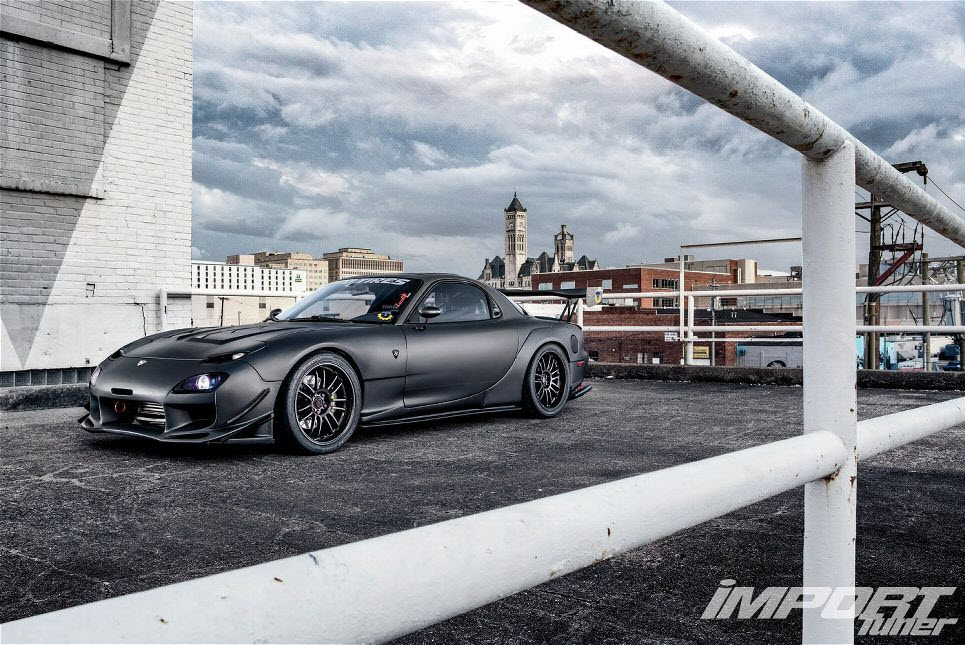 Philip Sohn's love affair with the FD RX7 chassis and rotary engine started 20 some-odd years ago and, like most relationships (whether people want to admit it or not), the attractions started with appearances. "I first saw an FD back in the early '90s when they first came out. I loved the look but like most people in their late teenage years, it was just a dream to actually own one of my own." Seeing the car provided the fuel somewhere deep within him, but riding in it lit the fire. The thing was that the ride didn't happen for years. After high school, Philip went to college and graduated, providing him with the financial means to go out and purchase a car of his own. This proved timely because it wasn't till after he graduated from college that he had the opportunity to actually ride in one. "My first ride was in a slightly modified FD, and at that point I fell in love with the sound and feel of the car," he says. The sound of the rotary engine and feel of the chassis, in addition to the inarguably smooth and timeless lines of the FD chassis, solidified Philip's determination to have his own. "About one to two years after that, I bought my first '93 base black RX-7," he says. And so it began. 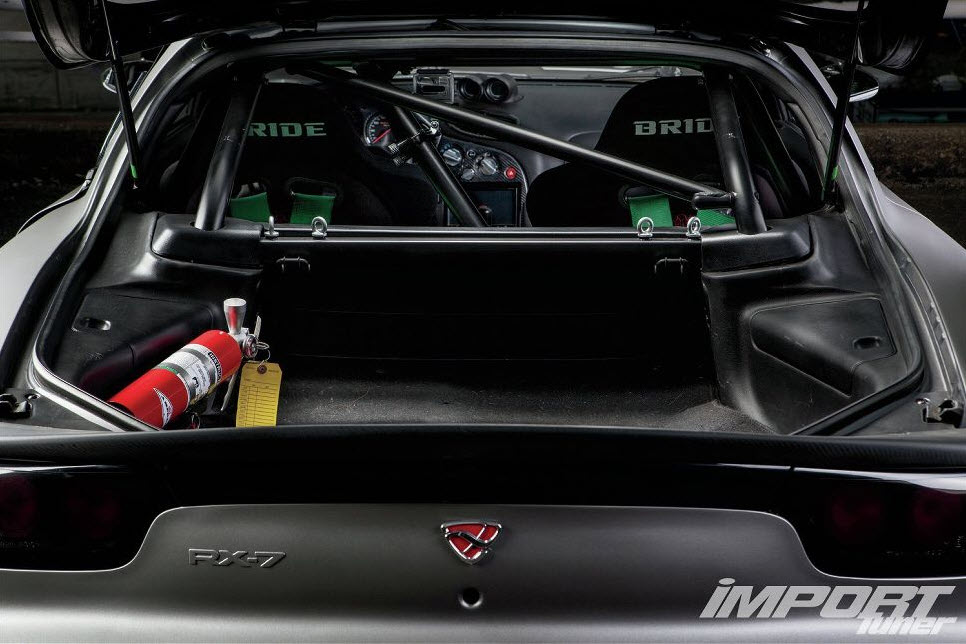 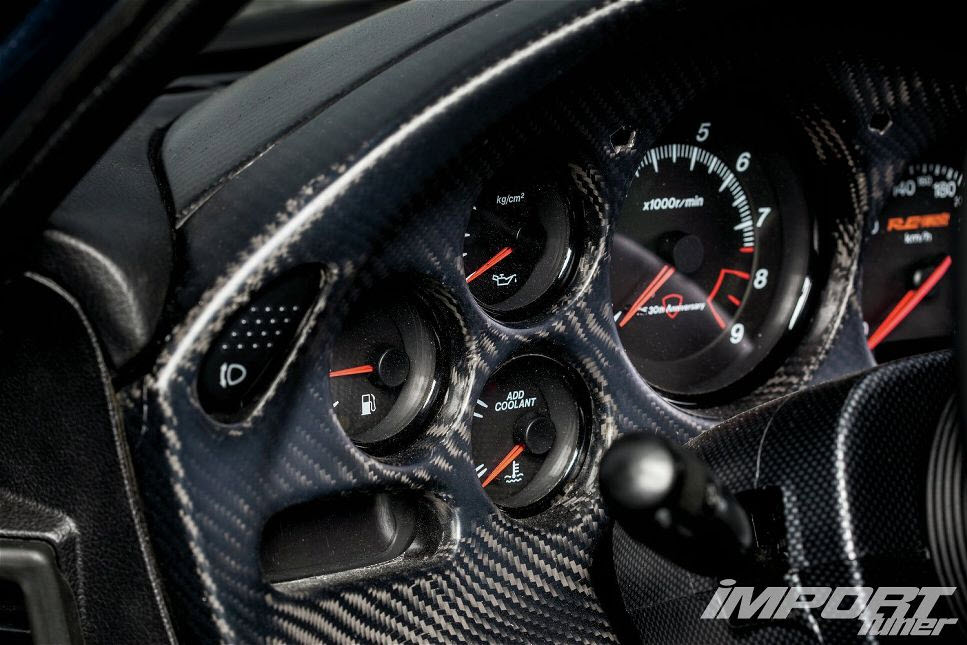 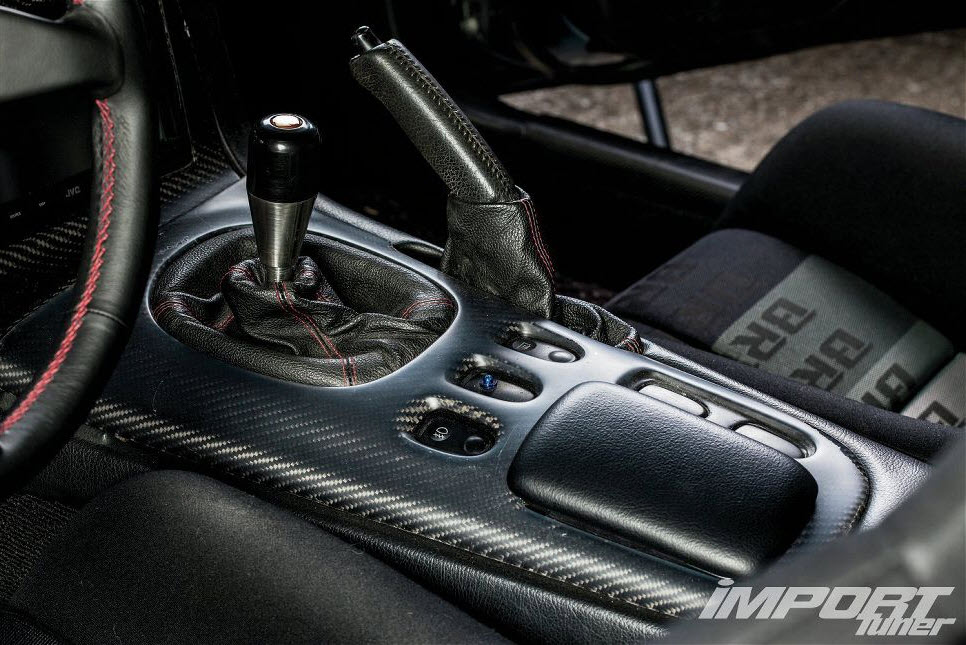 "When it comes to FDs, there really is only one tuner in the world that stands out, and that is RE-Amemiya," Philip says. "They have produced some amazing FDs in the past, and I consider them to be pioneers of rotary tuning." Additionally, FEED's designs and products resonate with Philip. Therefore, it is no surprise that he opted to utilize these companies' products to create the striking and menacing RX-7 you see before you. "When FEED first came out with the Type 2R bumper, I liked it because it modernized the car," he says. "I loved the subtly smoother lines of their front fenders and rear flares." The combination of those FEED aero pieces in addition to the RE-Amemiya Pro Carbon rear diffuser, and vented hood and GT wing provide the lines and shapes, with the dark shade of paint and Diamond Black Volk RE30s completing the menacing appearance of this Mazda RX-7. To power this dark beauty, Philip utilized a BNR Stage 3 turbo coupled to an HKS intake with an A'pexi intercooler to keep air temps down. Exhaust gases travel through a Racing Beat downpipe and exit through the dual-tipped RE-Amemiya exhaust. An Adaptronic ECU, with tuning being done by Philip himself, handles rotary engine management. In fact, everything down to the color change was done with his own two hands. 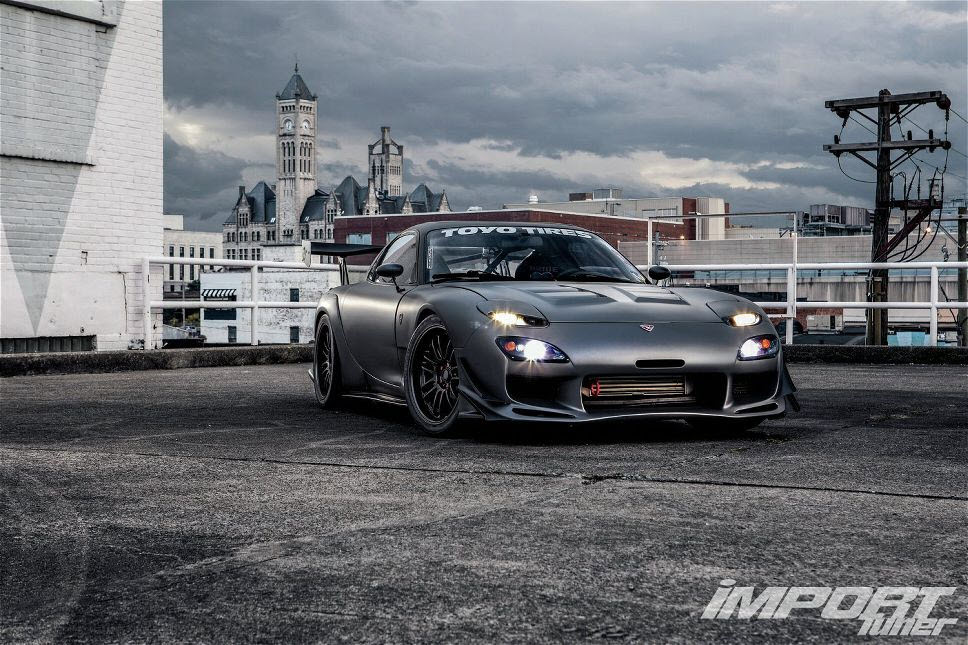 The physical attraction made him a fan, but it was actually the community who contributed greatly to his sticking around. To all of you who have ever dated an attractive woman, met her friends, and realized that they were annoying enough to make you head the other direction, raise your hands. OK, you guys know what I'm talking about. But this wasn't the case for Philip. "I got into the cars because of the community," Philip says. "I knew nothing about rotary vehicles when I bought my first FC back in 1998 and even less about my FD back in 1999. It was local FD owners who helped me learn and lend a helping hand during my first FD build." The camaraderie and positivity in this community had such an effect on Philip that it inspired him to collaborate with fellow rotorhead David Jerome and IT guy Kevin Henderson and start RotaryCarClub.com. "And to bring the community closer, I started a rotary event called 'Deals Gap Rotary Rally (DGRR)', which will be celebrating its 10th anniversary in 2014," Philip says. Pretty cool, don't you think? Well, it doesn't stop there. "The rotary engine is still a mystery to many people and support for them is minimal compared to piston engine cars. My goal is to make these cars known to the new generation of people and show them how a 20-year-old car can keep up with new 100K plus cars on the road and track." 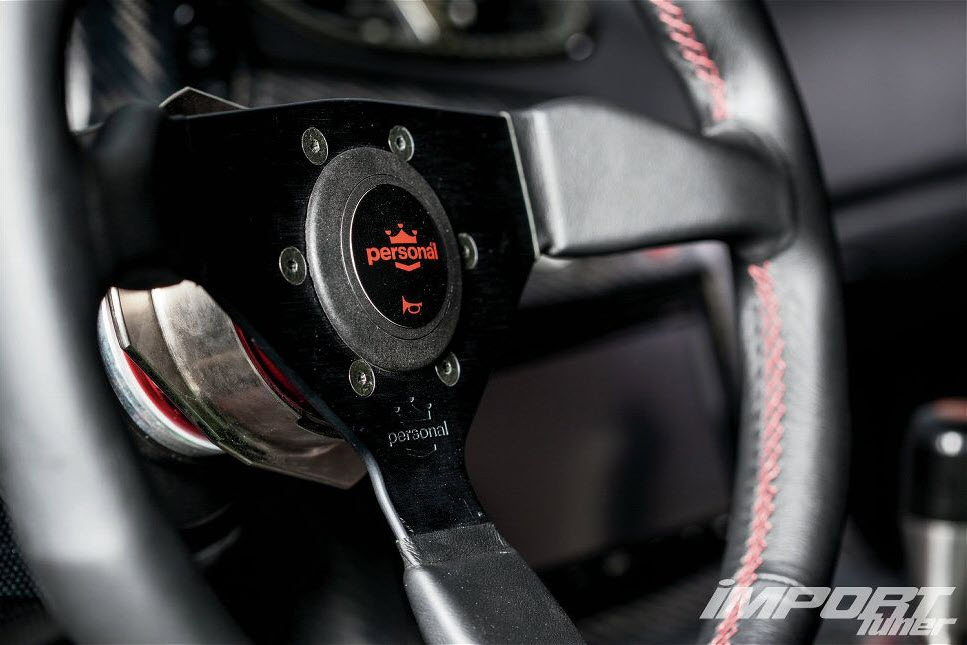 Philip has owned this particular FD Mazda RX-7 chassis for almost 10 years, making it the longest he's owned an FD chassis. That's saying something given how many other chassis in general that he's had. Philip has owned an '88 RX-7 convertible, three different '93 RX-7's (a base, Touring, and R1 model), a '94 FD, a '72 RX-2 coupe, a '73 RX-3 coupe, a '91 Eunos Cosmo three-rotor, an '85 RX-7 GLS-SE, an '04 RX-8, and even an '06 MX-5. So it is quite clear that his love for the rotary runs deep, but this particular car and his relationship with it is different than all the others. "This car taught me how to continue to fall in love with a car—even after 10 years and multiple times when I thought I was done," Philip says. "I've learned how to change the look of the car every year so I can fall in love with it over and over again. My goal is to continue my love for this car."

So there you have it. Here is an enthusiast whose relationship with his car sounds like a love that is deep and ever-evolving, keeping it fresh and new. It sounds like Philip has finally found his one true love and that he only has eyes for this one car. "I'm also building a '94 Mazda RX-7 and a '91 Eunos Cosmo," Philip says. Oh well . . . I guess it doesn't hurt to have one or two on the side to keep you busy. 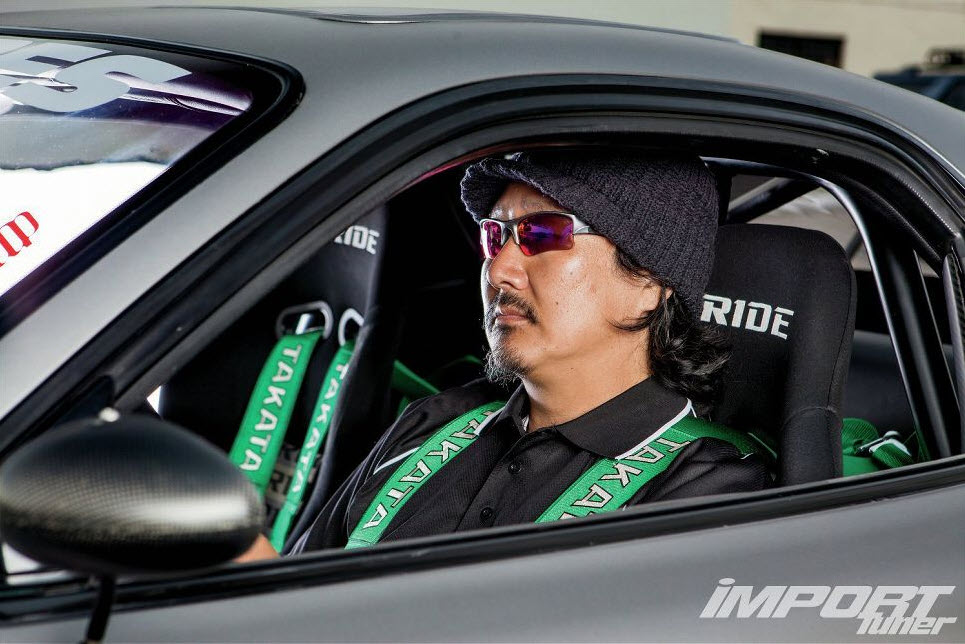 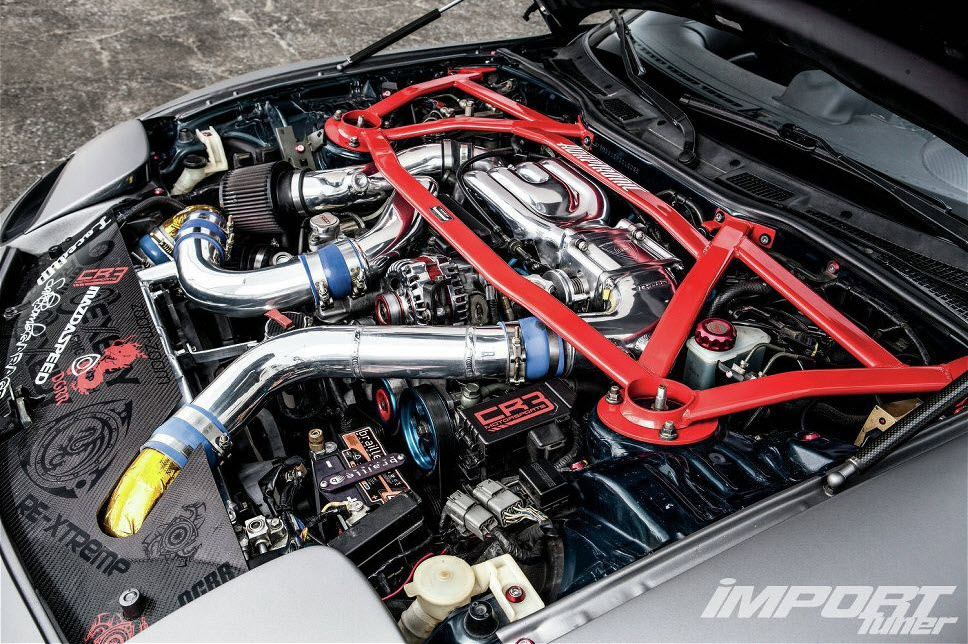 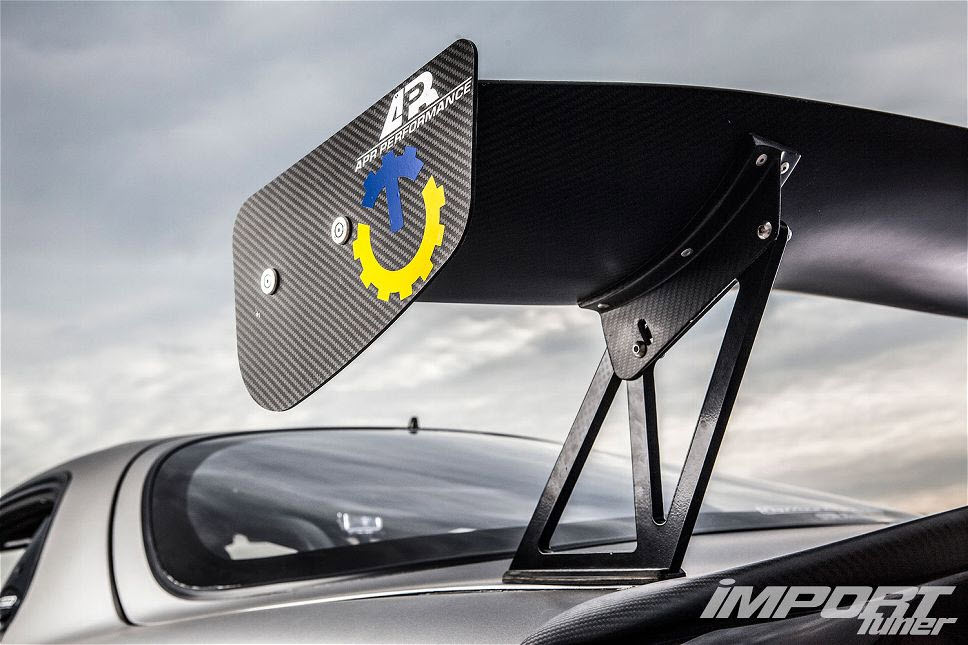 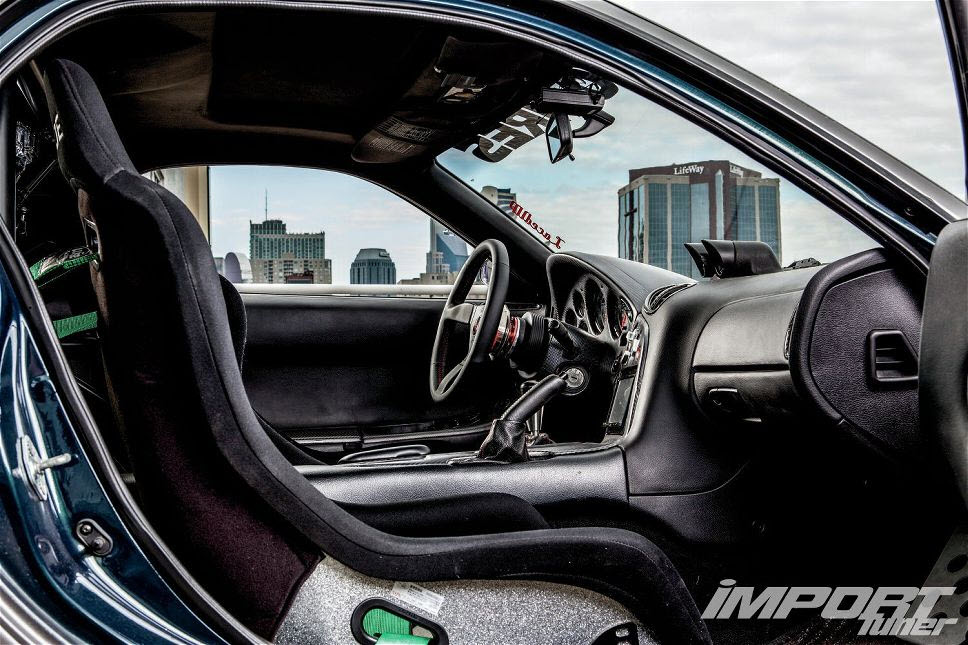 Gratitude "I would like to thank my long-time sponsor of my car and my event, Exedy Clutch USA; the coolest tire guy, Stan Chen, at Toyo Tires; my long-time friend and sponsor and the owner of BNR Turbos, Bryan Nickel; local fellow rotorheads Grant Snyder and John Lewis; my favorite photographer, Jeff Creech; Brad Keller who guided me step-by-step through the process of changing the color of my car using Plasti-dip; and finally my wife, who understands my passion for rotary cars and for allowing me to have four rotary vehicles and one Honda, and to spend my spare time talking to fellow rotorheads and going to car events. There is no better woman out there who would understand and let me do what I've been doing; without her support there would be no DGRR, nor would I have this cool feature." 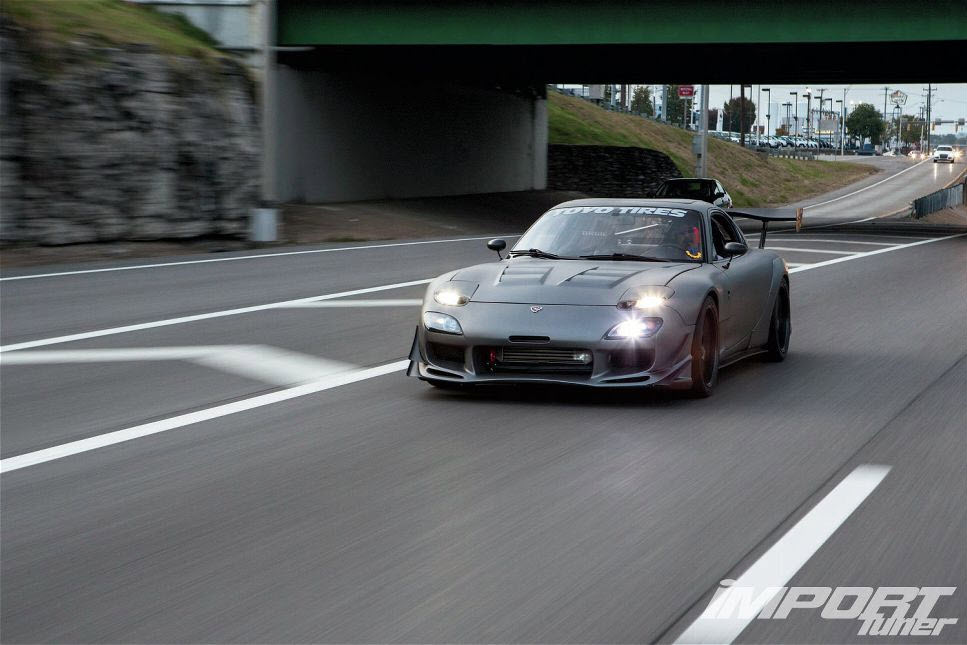 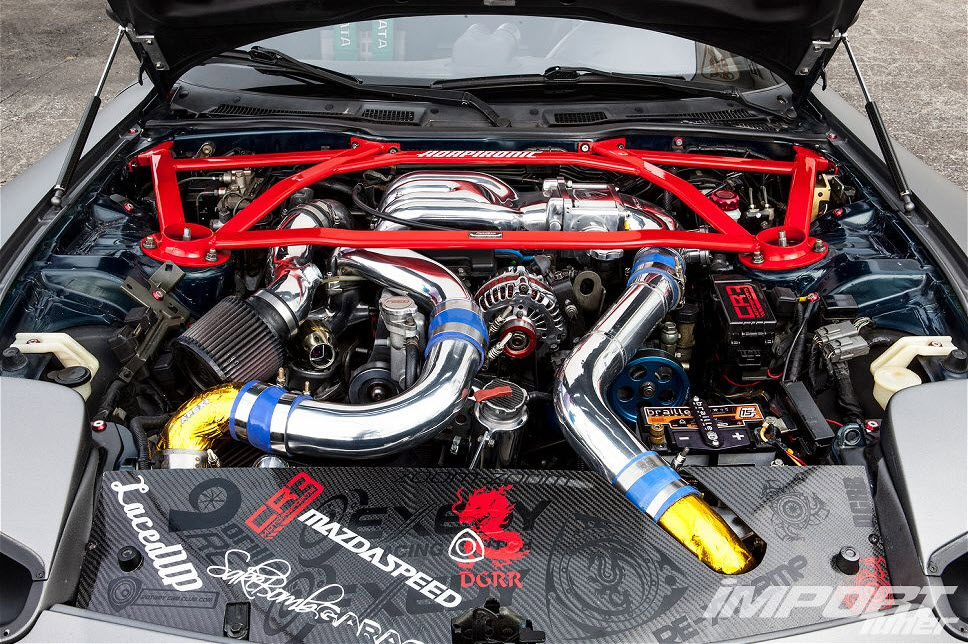 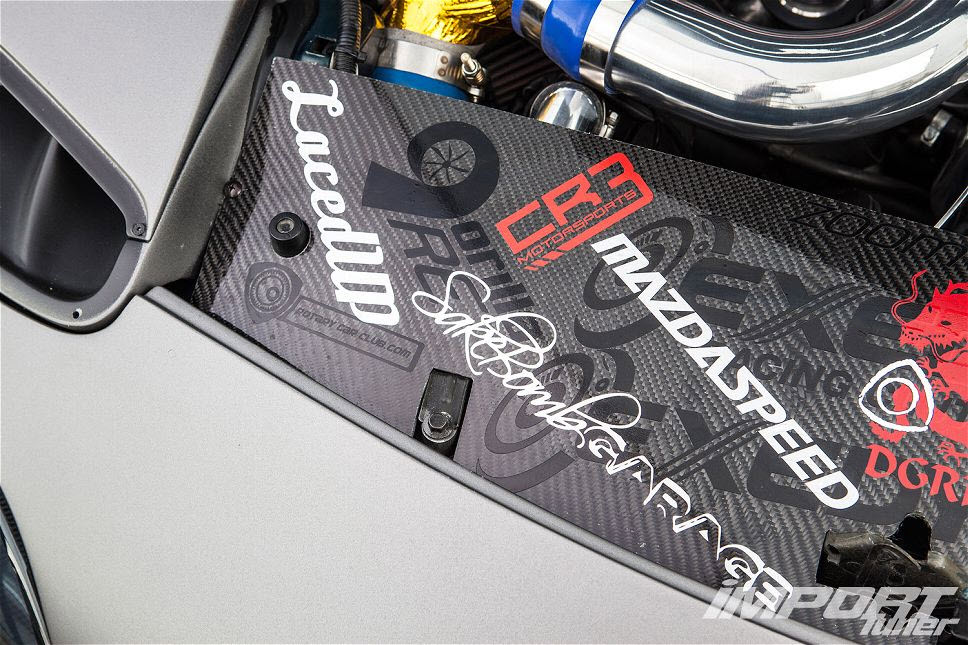 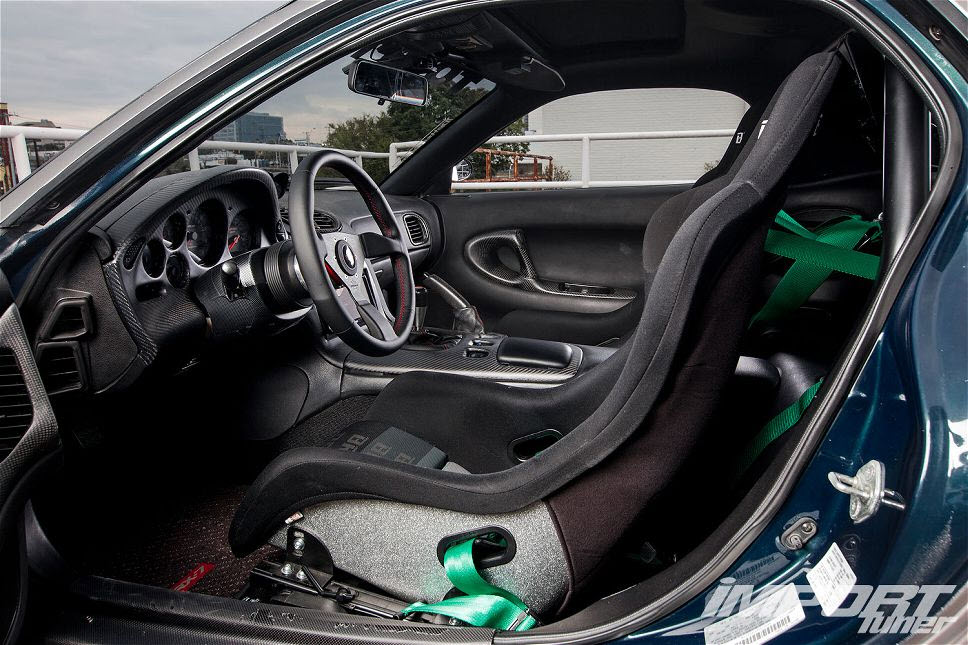 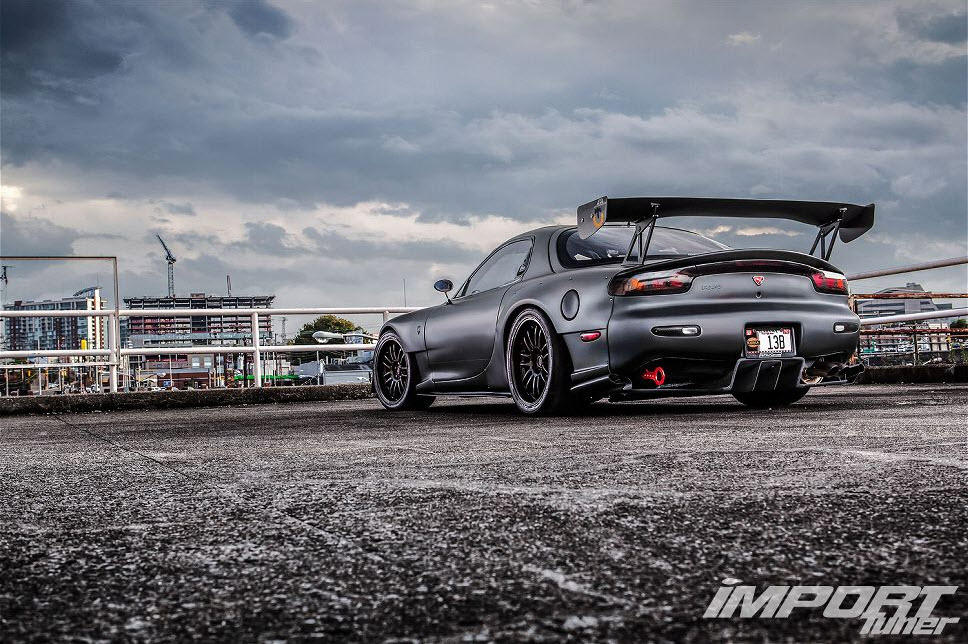