Immediately conjuring images of a different kind of Godzilla, Ben Sopra is a name almost synonymous with the Nissan GT-R. Headed by president, Kazunori Ueta, the company develops and builds aero kits for cars such as the Lamborghini Gallardo and the GT-R. Starting with the AWD Japanese beast, Ueta’s focus was to create an aero kit for the ex-Datsun. After developing the kit, Ueta called on the famous Universal Air, renowned for their air suspension set ups on both sides of the Pacific. Finally, a decision to collaborate with Art Factory which provided full artistic modification of the car proved to be a great choice as the work and designs really flow with the style and contours of the provided “canvas.” 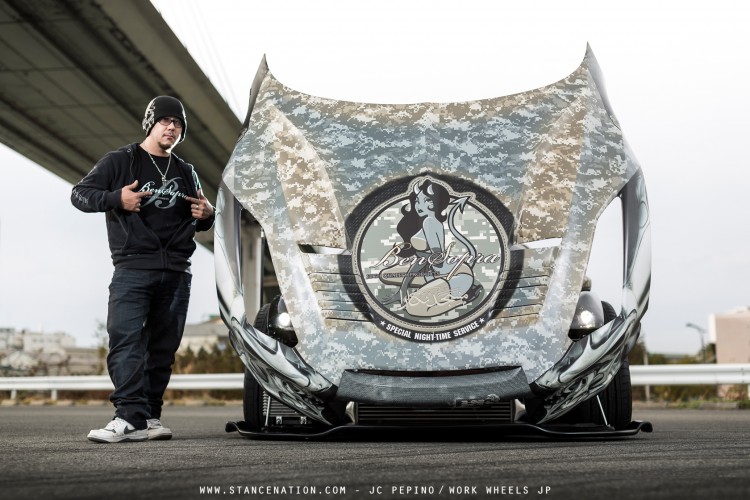 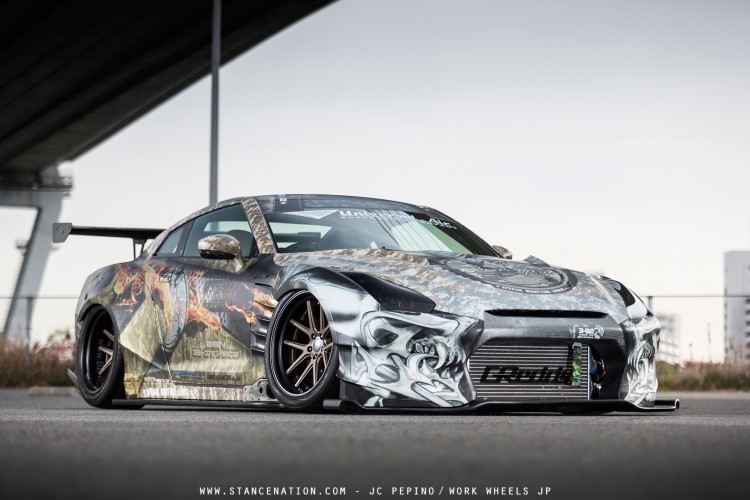 Debuting their first widebody GT-R at the Tokyo Auto Salon in 2012, Ben Sopra initiated the trend of widened kits globally and never looked back. Fast forward just a single year, and Ueta-san plunges into the world of drifting by entering one of his demo cars in the 2013 event. Being the first and only car with air suspension performing, as with being the first of anything, brought its share of doubts and uncertainties, however, the driver and Ueta were reassured after finding the car’s ability to handle and go slideways. Furthermore, the air suspension allowed them to be first. First one loaded into the trailer that is! 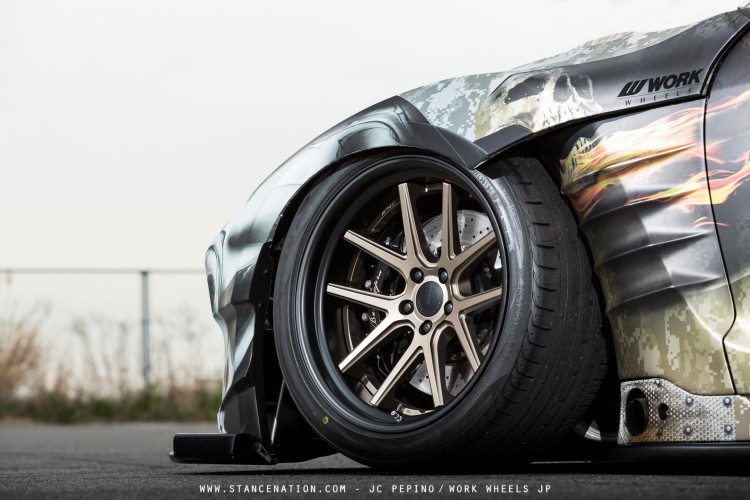 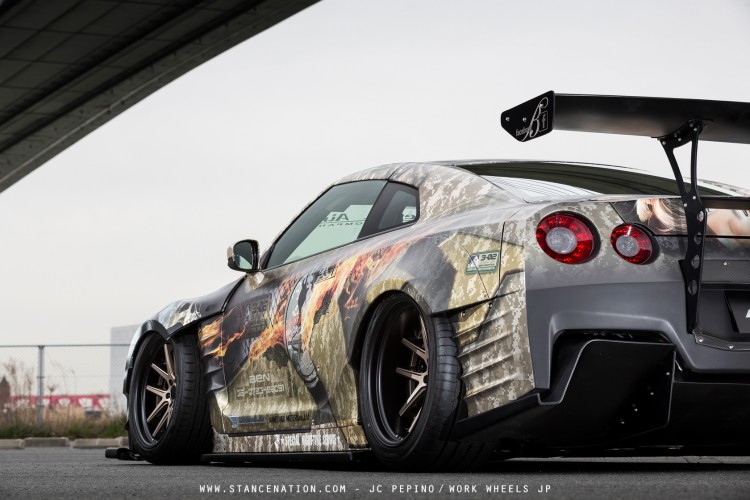 With the assistance of  a complete Universal Air suspension kit, this Godzilla sits pretty with it’s massive Work wheels (Work Gnosis CV203) sitting under the Ben Sopra fenders. Coming in at a gargantuan 20×10.5 +5mm & 20×11.5 -37mm, Ueta went against the stance norm and chose to not stretch his 285/315 width Yokohama tires(blasphemy! … just kidding) and run with straight walls. A high mounted rear diffuser ensures the speedy exit of drag causing air from underneath. To top it all off, literally, is a rear-mounted GT wing that makes its very own skyline above the rear and provides the downforce a car of this caliber commands 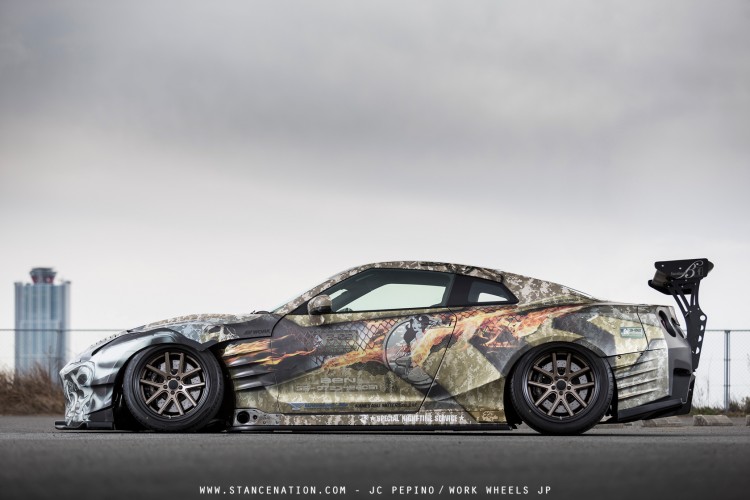 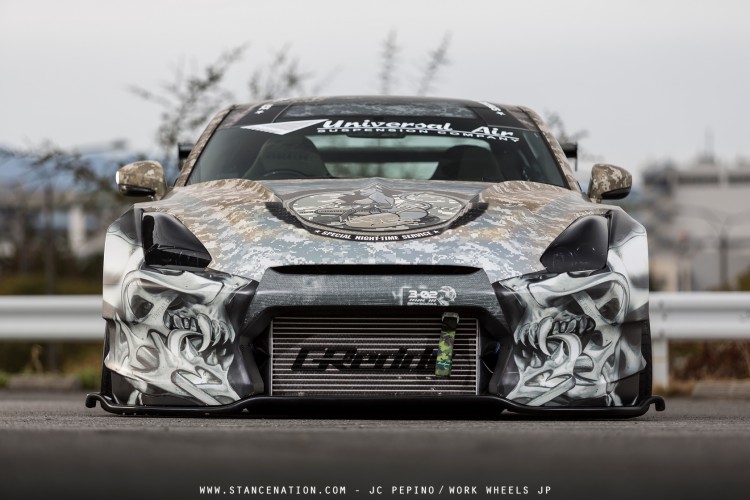 Although the project that was this car started in October of 2013, everything came together within 3 months time for a myriad of shows. Debuting in January for Tokyo Auto Salon AND taking the highest award, the Ben Sopra Godzilla then went on to show at Osaka Auto Messe and Nagoya Auto Trend in February and March, respectively. Moving onto the exterior details of the car, Ueta called upon Art Factory to handle the cosmetic detailing that prominently adorns every single curve and angle of his full kit. Blending together skulls, flames, digital and traditional camouflage on this GT-R, Art Factory’s design is reminiscent of the meticulous airbrushed artistic pieces that many custom chopper bikes or low riders sport. 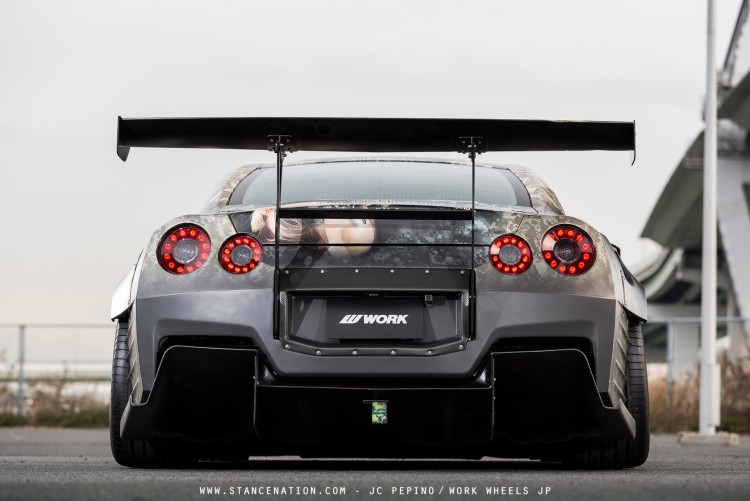 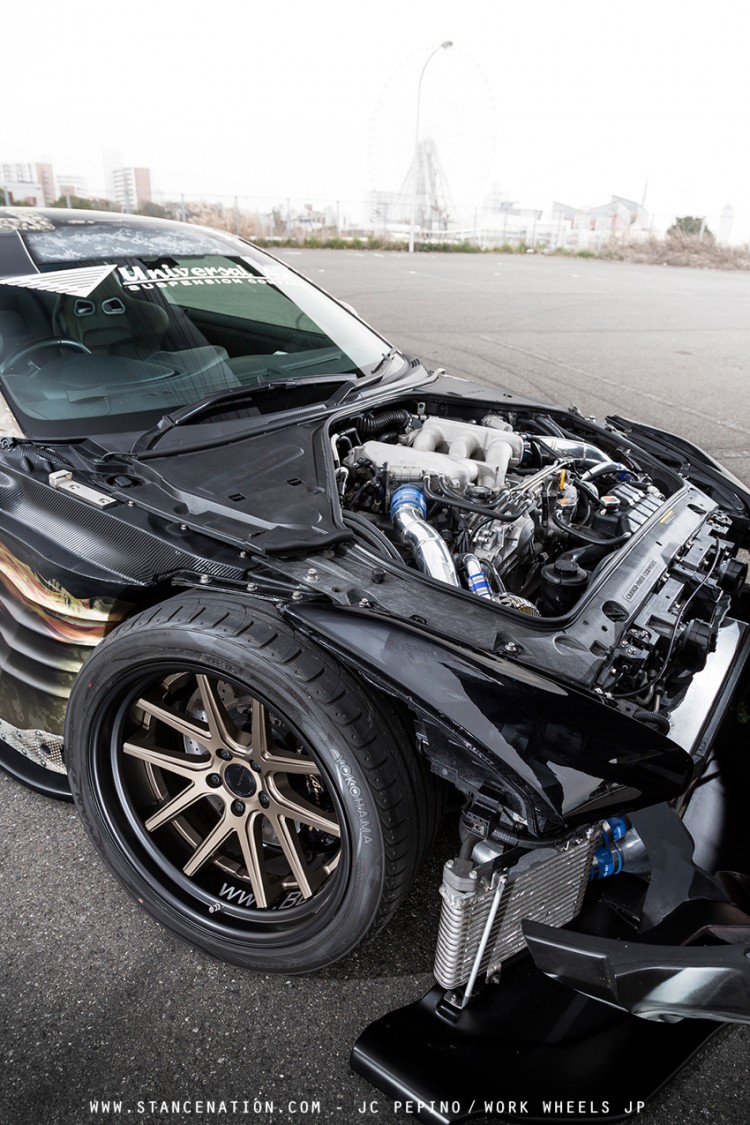 An internal shot baring the heart of this beast shows what produces the generous 600hp behind the massive 315 width tires that lay down the power. Although lacking a monster tune, it is very hard to be disappointed. Easily remedying any worries regarding said tune, the respectable AWD aspect coupled with the 600 horses definitely allow this car to get the job done, screaming exhaust and badassery all included. 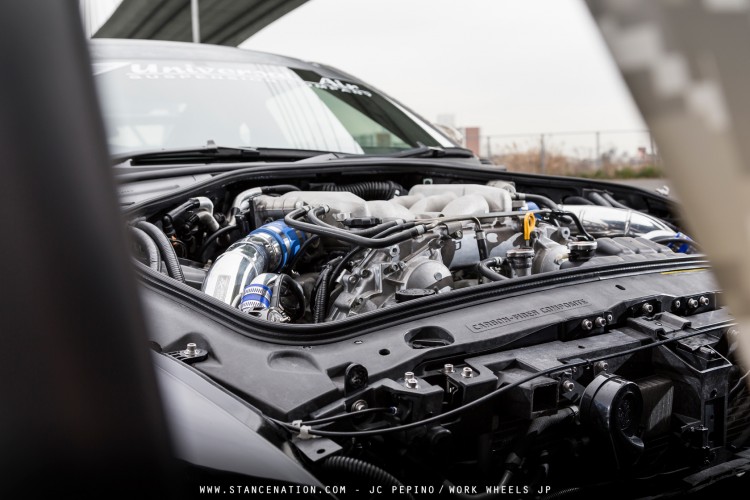 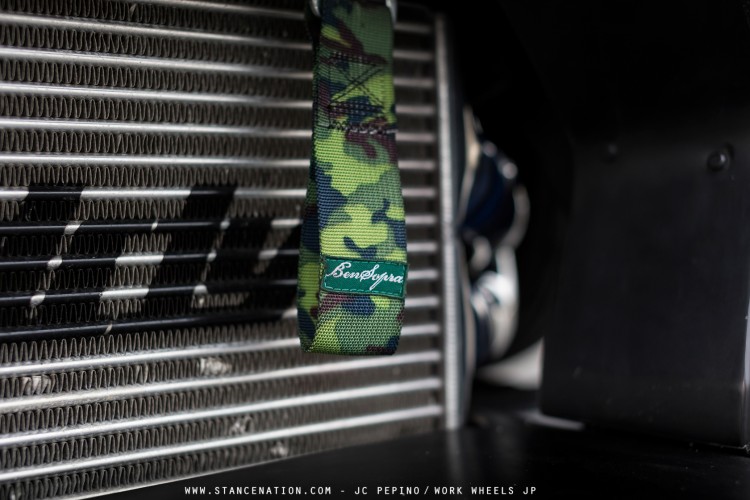 Sitting in front of the GReddy Front Mounted Intercooler is the exclusive Ben Sopra soft tow hook! The green camo print manages to find its place on the car and suits it so. 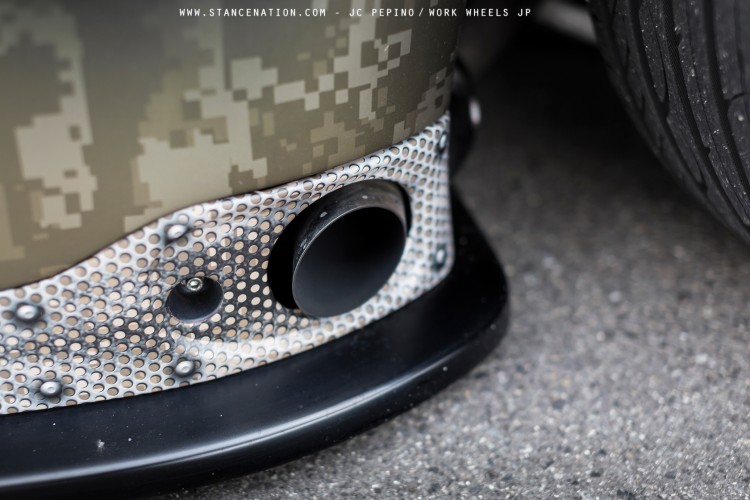 Here’s a shot of the relocated exhaust, moved from the usual rear of the car, it now sits behind the front wheels nestled in the side skirt. Usually done for the purpose of getting lower via the removal of any hanging exhaust pipes, it is surely a wonderful touch for this race car. 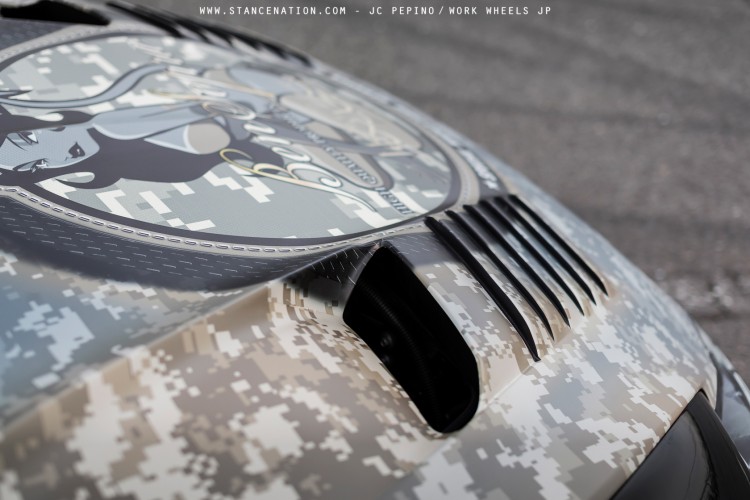 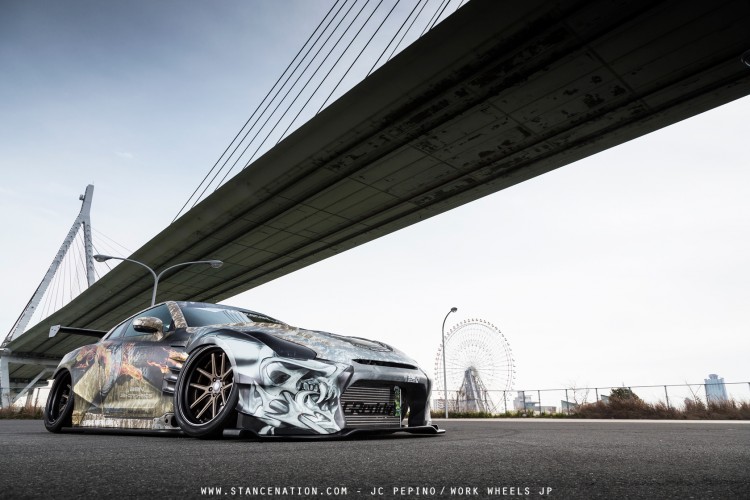 A splitter and canards sit on the one piece Ben Sopra bumper to redirect airflow favorably. In addition, it fulfills the lower fascia of the car created by the low slung side skirts. Is it just me or does the front bumper remind you of an Amuse S2000? 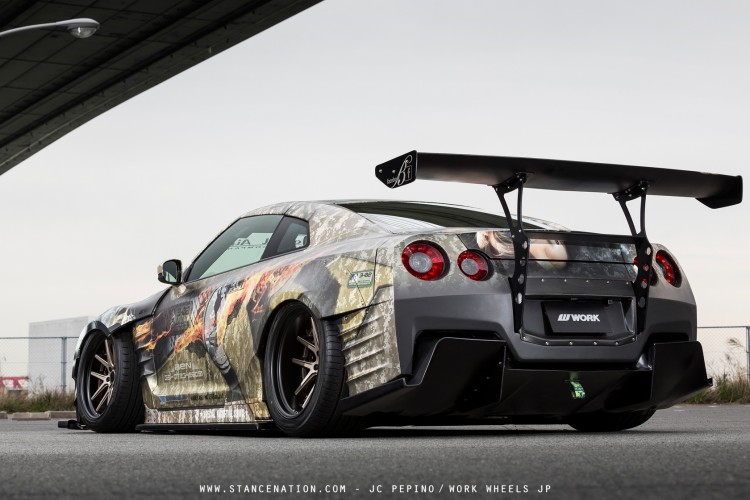 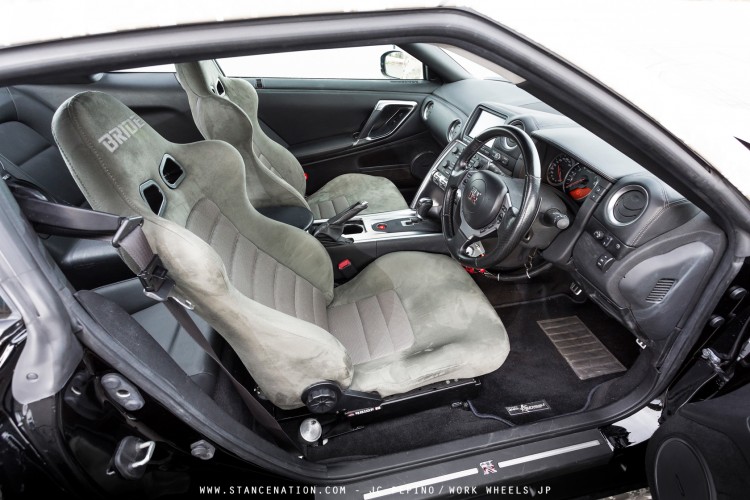 Besides the Bride Euro Star seats that show love and hug the occupants, the interior is mainly left untouched. Like the engine bay and exterior, the car is extremely clean in all aspects. Many quality parts and work was put into this car and it honestly makes me a bit sad that an entire ocean separates us from seeing it in person. Until this Godzilla makes like the film and goes stateside, we’ll just have to be content with these absolutely stunning pictures provided by my colleague, JC Pepino! 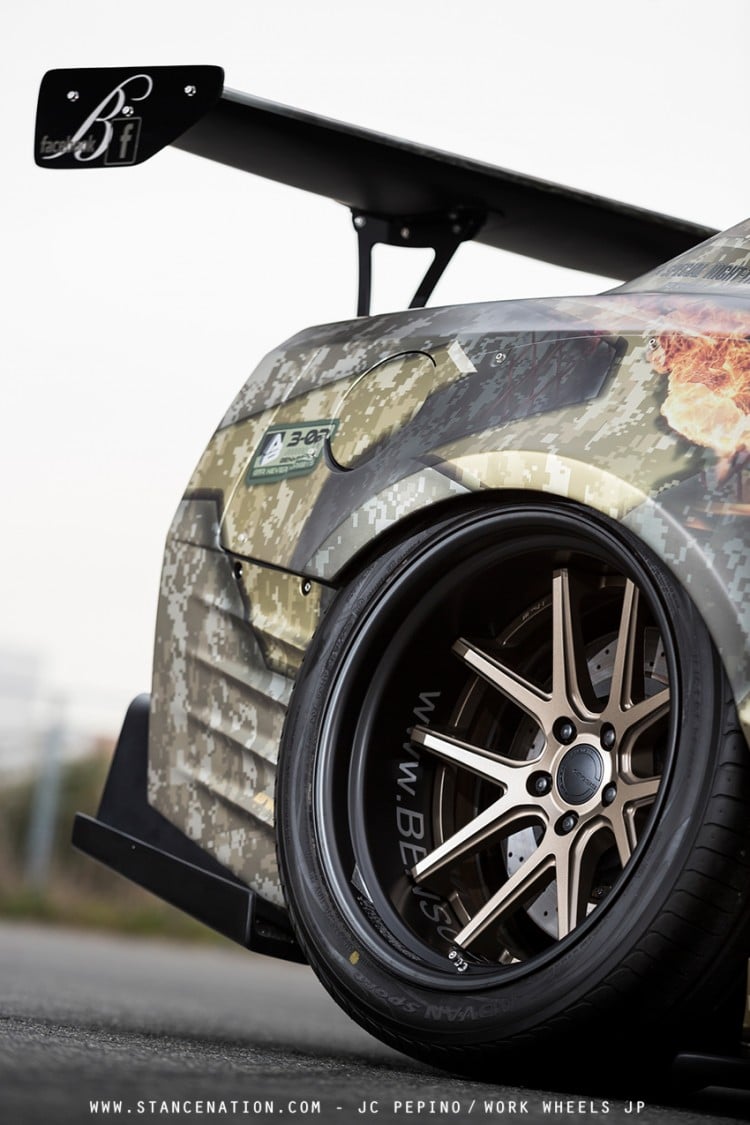 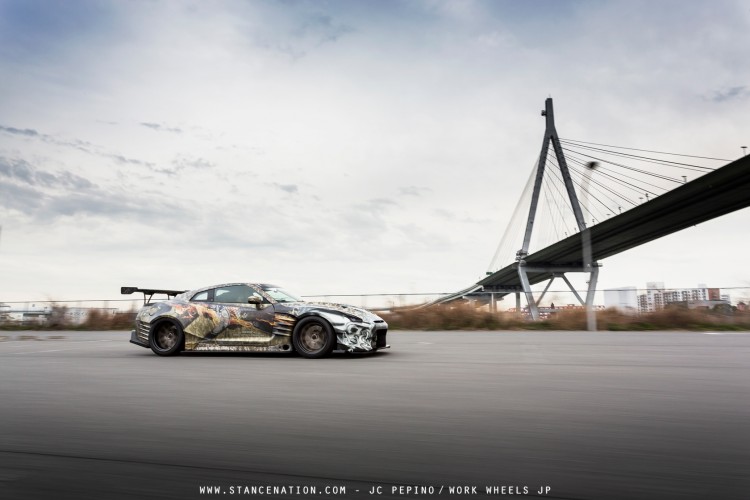 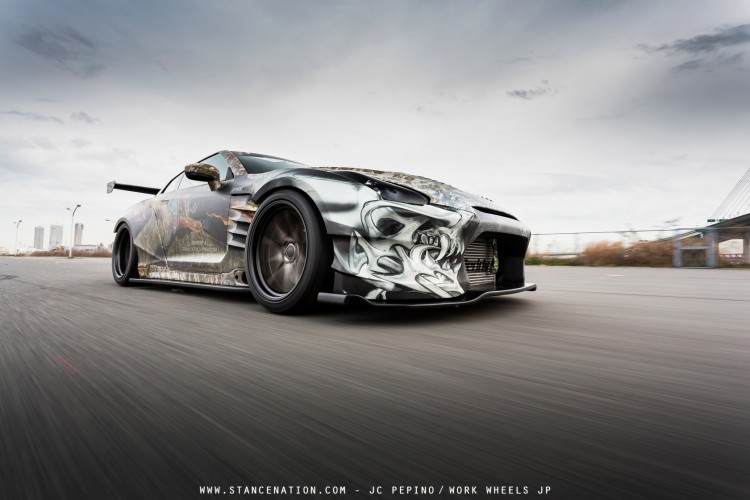 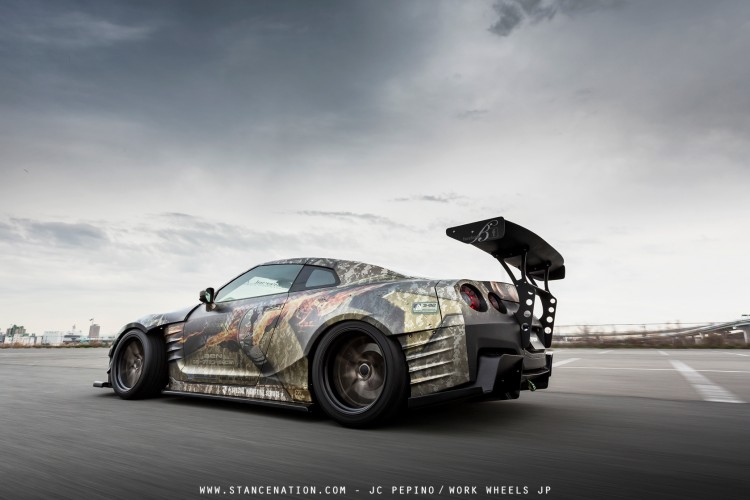